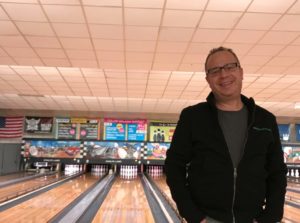 According to the May 6, 1899 edition of the Coconino Sun, “Flagstaff needs a bowling alley.” Entrepreneurs would heed this advice and over the ensuing decades establish a number of different bowling alleys around Flagstaff. Only one of these – Starlite Lanes – remains today, and 2018 marks its 60th year in operation.

Since buying Starlite seven and a half years ago, Ron Getto has made a number of significant changes to the operation, honoring the alley’s first six decades of business while setting the stage for future commercial success.

Getto says it was a real fixer-upper. “It was a strong business, but needed some love,” he said. The first thing he did was put on a new roof and install a heavy-duty air conditioning system. He said, “It doesn’t hit 90 degrees here too many times so I can understand how you’d get away without full air conditioning. But, you put 80 men in a men’s league under a 10-foot ceiling playing a competitive sport and it really heats up.”

Relying on his business pedigree that includes an MBA from Columbia University and two decades working for Wall Street firms, Getto also realized additional revenue opportunities that he could explore. For example, food was not available when he bought the alley, so he installed a snack bar. Getto also expanded the pro shop and installed a game room that now generates a six-figure income.

Getto also changed the look of the facility, adding a sophisticated LED lighting system last year. Every fixture is programmable to any color so the lanes are lit up orange for Halloween, green on St. Patrick’s Day and blue, white and gold for NAU home sporting events. On the exterior, he installed a new street sign and entrance portico.

All this work makes the facility an attractive, family-friendly entertainment destination for people who enjoy one of the world’s oldest participatory sports. Bowling, in some form, dates back thousands of years to ancient Egyptian times. It came to the United States as late as 1819, when Washington Irving mentioned it in his book Rip Van Winkle.

In 1952, a New York company introduced automatic pin setting machines, which replaced people who previously reset the pins. This triggered a surge in popularity for bowling, resulting over the next decade in an explosion of new bowling centers such as Starlite and Sky-high Lanes on Main Street in Flagstaff, which both opened in 1958. These were the latest bowling efforts in town; earlier alleys were located in several places around town, including subterranean facilities underneath downtown businesses.

Of all these, only Starlite remains, now boasting a staff of 24 and welcoming 125,000 visitors last year. Of these, 87,000 were bowlers while the majority of others spent their time in the facility’s popular Side Door Bar & Lounge.

With the recent additions and improvements, revenue is up 60 percent since Getto became owner. A standard metric for evaluating the financial success of bowling alleys is revenue per lane. Starlite features 16 lanes and, according to Getto, “Our revenue per lane puts us in the top 1 percent of the 4,500 bowling center operators in America.”

Getto adds that Starlite sees 11,000 games per lane per year, well above the national average of 6,000. “We have the revenue of a 28- or a 32-lane center,” he said, because of the added revenue of the ancillary products. “Bowling is less than 50 percent of our revenues. We’re more of a family entertainment center now.”

In addition, Starlite has long been a community center. Generations of people have grown up bowling here. Getto says many celebrate life-defining events at the bowling alley, from weddings and graduations to funerals.

Starlite has also long hosted charitable events, including fundraisers for groups such as Big Brothers-Big Sisters. “Starlite lanes does not know the word ‘no.’ If you’re a not-for-profit organization in this community, we will support you, whether that’s items as a giveaway for volunteers in your organization, a silent auction for a holiday party or a fundraiser.”

To mark the 60th anniversary, Getto says Starlite will host a public celebration event this spring. On top of this, discount opportunities such as “Throwback Thursdays” and 60-cent games on Mondays are being offered, as well as “1958 Pizza Pitcher Combination” specials in the snack shop.

Looking to the future, Getto says he may consider moving to another facility that will allow him to expand the venue. Whether this happens or not, he plans to keep investing in the business in order to keep it a quality experience. FBN

Photo caption: Owner Ron Getto applies his Wall Street background to bowling. Revenue has increased 60 percent since he purchased Starlite Lanes seven and a half years ago.

Defining Arthroscopic, Laparoscopic, Endoscopic
Do Two Things to Get a Raise or Promotion