By Flagstaff Business News on June 19, 2014 in Local News 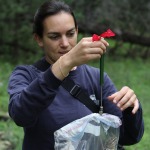 As Serra Hoagland looks for Mexican spotted owls in Southwestern forests this summer, she’ll be doing so with a $1,000 boost that may help cover the cost of travel and other expenses.

The Northern Arizona University forestry doctorate student took first place in the school’s inaugural 3 Minute Research Presentation Project, winning the prize money. The contest challenged research students to squeeze years of their work into a compelling three-minute pitch – without using their discipline’s jargon – that would resonate with a general audience.

“How good is the research if we can’t communicate it?” said Hoagland.

Ramona Mellott agrees. As dean of NAU’s Graduate College, she managed NAU’s first 3 Minute Research Presentation Project (3MRP), which is similar to ABC’s popular television program, Shark Tank, in which contestants have to “sell” their idea to potential investors in a matter of minutes.

“Our graduate students are doing really exciting research. They are trying to solve very complex problems. And they need to be able to effectively communicate these solutions that they are coming up with to a broad audience, people who may not be in their discipline,” said Mellott. “They will need to effectively present the main ideas of their research to help the public, including legislators and funders, understand what they are doing, the impact of their work, and convince them that it’s important to continue.”

Hoagland studies Mexican spotted owl habitats using satellite images to understand the effects of forest treatments on the owls, which are considered to be a threatened species. She has discovered that the owls use a variety of forest types for their nests and then return to their nests in forest sites that have been thinned.

“Well, it turns out, thinning doesn’t scare them off and, in fact, it could be beneficial,” she told the audience. “We believe this thinning allows the understory grasses to grow, which is a food source for the rodents that owls eat. By analyzing satellite images, we’ve discovered what forest types owls are looking for in a nesting site. The data we collected allows us to protect and actively manage areas throughout the Southwest that provide suitable habitat.”

“Many of these tribes sustainably manage their forests by using low-intensity fires and actively cut trees for a variety of purposes. What’s interesting is that our research group found that Indian forest management is a great model for environmental sustainability. Because of the tribes’ sovereignty, they can be more experimental and proactive in their management.”

Hoagland, a Native of the Laguna Pueblo north of Albuquerque, explains conducting research on Native lands can be challenging because of unwritten cultural rules about which scientists need to be aware. In her case, the owl is a sensitive subject among some Southwestern tribes.

“The Mescalaro-Apache Tribe has collected forest and owl data for decades,” she said. “This is the first time the tribe has shared information with a scientist from outside the tribe about the owls. I had a great relationship with them before I started this project.”

Hoagland says owls can have a negative connation about a coming death or negative event. “This isn’t necessarily the case with my tribe, so this wasn’t a barrier for me when approaching other tribes and their elders. All fires have the potential to result in a metaphorical ‘death’ of the forest, so in the bigger picture, the owl can be seen as a messenger warning about the danger of unhealthy forests. As tribal elders have told me many times in the past, it is our responsibility to care for the forest and all the creatures within. My research will allow us to do just that.”

NAU Provost Dr. Laura Huenneke says the 3 Minute Research Presentation Project gave students the opportunity to take the initiative and practice skills that will help them beyond their college years.“The large audience in Ashurst Auditorium heard eloquent and compelling descriptions of an impressive array of scholarly work.”

Twelve finalists presented before a panel of judges. The event was open to the public. FBN