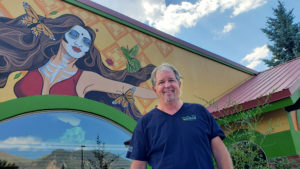 “Last week, at least three local restaurants closed for the day due to lack of staffing,” she said.

The Flagstaff metropolitan area ranks second for U.S. metros that provide restaurant workers with the best opportunity for healthy wages, an abundance of jobs and a more affordable cost of living, according to a recent study by moveBuddha.com. The study ranks all U.S. metros to find the best conditions for working in a restaurant as a cook, server or host.

The team at moveBuddha.com, which conducted the study, used data for the Flagstaff Metro Area that includes all of Coconino County. The combined metropolitan area has an estimated population of 145,101.

Maddie Agee, assistant manager at Agee’s in Munds Park, agrees that the Flagstaff area is a good place to be for restaurant workers. She points to the small-town atmosphere, where it’s easy to make connections; the climate; and the kindness of small business owners and management. “In all honesty, this is a very kind place to work. In the two previous restaurants where I worked, the management was very kind and understanding,” she said. Agee began her career in the hospitality industry as a banquet worker at Little America and as a food runner for the Pinewood Country Club in Munds Park.

“Minimum wage was difficult when I first started working, but now they are making great strides to make it a livable wage up in Flagstaff,” added Agee, who now drives to work at her parents’ restaurant in Munds Park, 22 miles south of the City of Flagstaff.

The study’s scoring system gave double weight to mean hourly wages in order to spotlight cities where restaurant workers earn more. “Our ranking aims to really home in on areas offering higher than hourly wages, which is another reason Flagstaff is highlighted. There are still a number of states (and cities) that have not adjusted minimum cash wages for tipped employees from the current federal minimum wage for tipped employees of $2.13. Flagstaff (and Arizona) are an exception,” Kristen Klepac, a spokesperson for the study, said.

“Flagstaff minimum wage is now at $15 per hour and will go up to $15.50 per hour in January, as a result of a voter-approved initiative in 2016,” explained Regina Salas, elected Flagstaff City Councilmember. However, she added that local restaurants struggle to find a skilled and trained workforce, even with a higher minimum wage. “Last week, at least three local restaurants closed for the day due to lack of staffing,” she said.

“Our $15/hour minimum wage is without a doubt one of the reasons we’re coming out on this study,” said Jamie Thousand, owner/operator of Satchmo’s restaurant and Roadside Stove food truck at Mother Road Brewery. Satchmo’s is one of the restaurants that has reduced days of operation because of a limited labor pool. “We’re open Thursdays to Sundays now, but we’re trying to add one or two days per week,” added the restaurant owner.

Thousand meets with other Flagstaff restaurateurs affected by a limited labor pool and the rising cost of goods to share ideas and best practices. “We’re always out talking about the next best thing we can do for our crews – unfortunately, it’s not one of the reasons we made this list,” he said. “When you talk about a caring culture, Flagstaff is that place.”

One of his colleagues in the restaurant group is John Conley, owner of Salsa Brava Mexican Grill and Fat Olives. Conley is skeptical about the report.

“This paints a good picture, but I don’t believe this,” countered Conley, who also serves on the Northern Arizona Lodging, Tourism and Restaurant Association board. Although Flagstaff is known for a higher cost of living, the new report shows that cost of living in the metro area is on par with the national average, stating “the real value of $100 in Flagstaff is $100.70.”

“That line disputes the whole report,” said Conley. He could not match the numbers with comparable data from the Greater Flagstaff Chamber of Commerce and other cost of living indexes for the Flagstaff metro area.

The Greater Flagstaff Chamber of Commerce participates in compiling information for the Council for Community and Economic Research. That research bureau reports the Flagstaff composite cost of living index at 113.5, or 13.5% more than the national average, for the second quarter of 2021. The composite index reflects pricing in six categories: housing, groceries, utilities, transportation, health care and miscellaneous goods and services. The chamber has conducted the pricing survey as a community service for more than 15 years.

In another cost-of-living index, bestplaces.net, shows Flagstaff’s cost of living as 117.0, higher than the overall US index of 100.0. In this study, groceries, utilities, transportation and miscellaneous indexes hover under or near 100, but the housing index weighs in at 165.9. They report that rents within the city are $196 higher than the national average for two-bedroom apartments, $187 higher for three-bedrooms, and $295 higher for four-bedroom apartments. The disparity drops for rental units in outlying areas of Kachina Village, Munds Park and Parks.

When Thousand asked about the challenges for Flagstaff area restaurant workers, he responded, “Number one is housing; we just relocated one of our former kitchen managers from Boston. When he first searched rents online, he found that they were comparable to Boston. But in the last four months, Flagstaff rent had gone up $400-$900 from when he first looked online.”

“Cost of living is highly variable within metropolitan areas, so while Flagstaff proper may be more expensive, the BEA measurement has found areas within the region that offer prices that are on par with the nation as a whole,” clarified Klepac. The moveBuddha.com study used the Bureau of Economic Analysis (BEA) regional price parities (RPP), which measure the differences in price level across metropolitan areas for one period in time. RPPs are expressed as a percentage of the overall national price level.

“An RPP is a weighted average of the price level of goods and services for the average consumer in one geographic region compared to all other regions in the United States,” states the BEA methodology report. They compile RPP from:

Survey data from the Bureau of Labor Statistics (BLS); and

“What makes Flagstaff great is that there are so many small businesses, and it’s more fulfilling to be part of a small business. In a small business, you care about the people you work with and want them to succeed,” concluded Agee.

“In the restaurant industry, we are driven by costs of goods. There’s such a tiny margin in this industry that it’s difficult to pay more [for wages and employee benefits]. Will the public still come in when your pizza is $10 more because you really take care of your people?” asked Thousand, who disclosed that at Satchmo’s, no one makes under $18 an hour. FBN