You are here: Home / Community Profile / Summit Spas Creating an Escape at Home 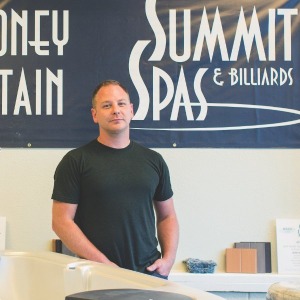 Summit Spas & Billiards is the reincarnation of a couple of old-time hot tub stores.

First, there was Mountain Home and High Country Styles. Jeff Waldheim, owner of Summit, got his basic training in spas at Mountain Home.

“Basically, Mountain Home was a hot tub and game room shop,” Waldheim said. “The location was really well-known. The old shop was at the train underpass. I began working at Mountain Home as a technician working on pool tables and hot tubs. After many years I went from service technician and managing the service department to store general manager.”

The spa and billiard shop then was moved to a location nearer the university. Waldheim continued working, but wanted to put his own style on the store. In November 2010, Waldheim acquired the business and started making changes.

“I wanted to do it better,” he said. “I knew Flagstaff needed a shop available six days a week. I knew I wanted a location where people could come in for advice and support.”

He said wanted to have a small little store, but instead he got a big store. “It’s gotten out of control [from] what I initially planned,” he said with a chuckle.

Waldheim, 34, believes his customer service sets his business apart from others. “It’s a lost art. They come in and I know their name. I remember their product type. I know what they need. Those are my opportunities to shine.”

Waldheim found a location on East Route 66 with great exposure and moved the business, but it took a while for customers to find his new location. “Letting everyone know where I was difficult, but when they found me there was a sense of relief that I was still around. I have the supplies all the folks need after they buy their spa or things they need to support the spa they have.”

From new spas to relics from the ‘80s, he provides services and products. Last fall, he took over the other half of the building in which the store is located.

“We now have 4,500-square-foot facility including warehouse space,” he said. “We have a huge, 15 hot tub showroom now.”

“I do a pretty bustling business in darts and dart supplies,” he said. “I also sell saunas and patio heaters.”

He acknowledges that taking over a store such as his at the height of the recession was taking a chance. “I thought about so many things. I thought about a career change, but you become very specialized,” he said. “I knew there was a market for a shop like mine. So basically, after much contemplation, I decided to go for it. I’m glad I did.”

His customer mix includes Flagstaff residents and second-home owners. “I am here to answer questions, help them test water, or teach them now to care the spa that came with the home they just bought.”

What he would also like to teach people is how to create an escape at home; in fact, most of his advertising now includes the idea. He said people are beginning to invest in something for their home their family will use every day instead of spending thousands of dollars on a family vacation every year.

“I want them to turn their backyard into a family retreat, that it is something very special.” FBN