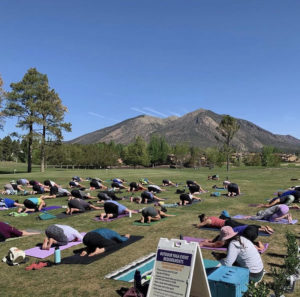 “I have incredible gratitude to the community who have kept that loyalty the whole time.”

As with many personal fitness and wellness businesses state-wide, yoga studios in Flagstaff have taken a pummelling during COVID-19. When the extent of the pandemic became apparent and state mandates kicked in, there was no option but to shut down in-person group yoga classes. During the past 18 months, many yoga studios switched to online platforms like Zoom and YouTube in an attempt to keep their teaching programs alive.

While this might sound like it would’ve been a relatively easy fix, the market for online workouts quickly became oversaturated, with teachers vying for students willing to take remote classes. And although studios were saving money on lights and heat, the biggest expense – rent – was just too much of a stretch for many yoga businesses, which couldn’t keep up with payments and closed.

Flagstaff’s Erin Widmer is a survivor. Starting as a teacher at The Yoga Experience in 2000, Widmer took over as owner in 2008. But it’s been a hard road for her to stay open. With between 36 and 40 classes a week, workshops at least once a month, and a teaching training program once a year, Widmer’s studio was averaging 1,200 student visits per month, in the year prior to the pandemic. In 2018, she relocated her studio to Old Canyon Court, behind Warner’s nursery off Butler Ave. The move “gave a huge boost to the business, which was thriving – we were building income and attendance month-on-month” said Widmer, wistfully. Ordered to shut down on March 17, 2020, she immediately switched to online instruction, offering 50% of the pre-pandemic class schedule. She had to modify what she was teaching, too. “We don’t teach such advanced postures online, since I can’t make sure if students are being safe with those,” she explained.

Echoing the experience of so many yoga business owners, things went pretty well for a while, although Widmer had to lower prices. “Essentially almost everyone stopped work and had more time for home practice,” she explained.

So, you might expect that when in-person classes were finally allowed to resume earlier this year, it would be back to business as usual. Not so, says Widmer – for a couple of reasons. First of all, former class sizes of 20 to 25 students are now limited to 10 participants. And even though Widmer now offers a mixture on 13 online classes and 11 in-person classes a week, she said, “It’s harder now than when pandemic first hit.” That’s because of a second factor – “with most COVID restrictions lifted, people are busy again and tired of doing things online, combined with sometimes not feeling comfortable with coming back to the studio,” Widmer said, which has resulted in classes that are often minimally attended.

Undaunted, Widmer has demonstrated great creativity in making the return to in-person learning attractive and fun. Last year, she arranged to use one of the greenhouses at Warner’s nursery – “it was a great space, we were doing yoga surrounded by beautiful plants, with humidity, warmth and lots of light!” said Widmer, who called the classes “rainforest yoga.” Her studio space has windows and a door, which she’s been opening to an outside deck for classes, which have been going on once a week since April. But with the weather cooling down, that practice will have to end throughout the winter months.

Widmer says that three key things have helped to keep her business afloat: receipt of some PPP loans, cutting every cost she could, and a core group of incredibly loyal and dedicated students – some of whom have been paying her the whole time as normal, even though she’s only seen them in person once or twice since the pandemic began. “I have incredible gratitude to the community who have kept that loyalty the whole time.”

Going forward, Widmer is playing a “tortoise game” – taking things slow and steady – with her existing students, some of whom have been coming to her classes for decades. And while it is proving hard to generate new clientele right now, Widmer is trying to figure out how to utilize the array of online content she’s developed during COVID as part of her business plan. But her main hope is to re-establish the large, thriving community and pre-pandemic program of events that brought people together as soon as possible in the coming months. It’s a sentiment that many similar businesses no doubt share. FBN

For more information about the yoga studio, visit theyogaexperience.com/.