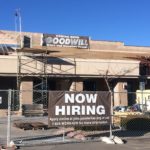 If you’re a fan of thrift shopping – or just find it satisfying to donate – there will soon be more venues for you to do that. Goodwill is opening not one but two new stores in Flagstaff. Store re-fitting is already underway at the former Albertsons in Flagstaff opposite Fry’s and the same will soon … END_OF_DOCUMENT_TOKEN_TO_BE_REPLACED

BBVA Compass announced that banking veteran Mike Sventek has been named Flagstaff city president. From his Flagstaff home base, Sventek will lead the market’s Commercial Banking team to support continued growth and development in the area, while also acting as the bank’s representative for various … END_OF_DOCUMENT_TOKEN_TO_BE_REPLACED