By FBN on January 11, 2018 in Community Profile, FBN Spotlight 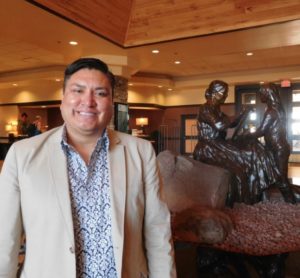 As a youngster, Arlando Teller stood in the yard of his Chinle home on the Navajo Reservation and looked up at an azure sky pebbled with popcorn clouds and jet contrails. He wondered where those white streaks crisscrossing the wild blue yonder were headed.

When he graduated from Chinle High School in 1991, his continuing curiosity prompted him to find out. He wanted to become a part of that high-flying adventure. He enrolled at Embry-Riddle Aeronautical University – home of the Eagles – in Prescott and earned his bachelor of science degree in Aviation Business Administration in 1995.

The success Teller had because of following his childhood ambition resulted in his being honored as one of two ERAU Chancellor’s Alumni Hall of Fame recipients in the fall.

Teller is the first Navajo to graduate from the nation’s No. 1 rated aerospace and aviation university.

“I was blessed by the community of Chinle, the Navajo Nation and ERAU,” he said. “They worked together and provided me with scholarships so I could attend the university. I had opportunities from several other universities like Dartmouth and the University of Rochester. But the admissions counselor from ERAU persuaded me that it could give me the education I needed to pursue the career I wanted. She was right.”

Teller’s career indeed has been high-flying. Though not a pilot, he has years of experience working with airport and transportation management. He began in the San Francisco Bay Area, where he was Native American liaison and Transportation Planner for the California Department of Transportation.

He later returned to Arizona, where he worked with airport planning for Sky Harbor Airport, City of Phoenix; and Falcon Field, City of Mesa.

Since September 2009, Teller has worked for the Navajo Nation Department of Transportation. Initially, he administered for four years the seven airstrips on the reservation with the Department of Airport Management. “I have been dedicated to improving the airport system in all aspects on the Navajo Nation,” he said.

He is now the deputy division director for the Navajo Department of Transportation. In that role, he works with a budget of $60 million to $65 million annually and is tasked with maintaining service, maintenance, safety and planning for all aspects of transportation with the Navajo Nation in Coconino, Navajo, and Apache Counties in Arizona, and with adjacent counties in Utah and New Mexico.

His office is in Window Rock, but his work routinely takes him throughout Northern and Central Arizona and into nearby states.

Last February, Arizona Gov. Doug Ducey appointed Teller to be one of the seven-member State Transportation Board, where he represents all of Northern Arizona and its rural communities.

Teller Retains His Traditional Navajo Cultural and Spiritual Values
Teller was raised by his single mother, Clara Tah-Nunn, in the remote northeastern community of Chinle. In Navajo, the world Chinle means “water flowing out,” in this case, into scenic Canyon de Chelly.

“Mine was a traditional youth,” Teller explained. “My grandfather was a World War II veteran, one of the fabled Code Talkers. One of my roles as a youngster was to help take care of him as he aged. He learned to trust me. He told me stories of being a Code Talker and what he did. But he pledged me to secrecy. I will never reveal what he said. He also taught me the time-honored values that Navajos have had for centuries. I still honor those.”

Teller smiled as he explained the spiritual symbolism of the Eagle, which happens to be the mascot for ERAU. “In Navajo, the eagle is a sacred bird, along with the hummingbird and the blue bird – and sometimes the crow and owl. So, to have attended Embry-Riddle and to be called an ‘Eagle’ – that’s a very special thing for me.”

Teller said he is encouraging other Navajo students to consider attending ERAU. To support that ambition, he initiated a partnership with ERAU, the Navajo Nation and Armstrong Consultants. Through that program, select students from the Navajo Nation, usually two to four annually –are sponsored to attend ERAU summer camps to learn more about aviation, aerospace and other aeronautical-related opportunities that have exceptional career potential.

“I am passionate about introducing Navajo students to these opportunities,” Teller said. He cited one example of a Navajo high school student, Shannon Spencer, who participated in an ERAU Helicopter Exploration camp and logged time practicing flying, hovering and landing.

All the while, he also was taking academic classes.

Teller is urging Native American students to apply for the ERAU summer camp. “If they will contact me at ateller@navajodot.org, I’ll provide all the details they need,” he said.

In sum, Teller hopes to see more Eagles in the Arizona sky.

“After I graduated from Embry-Riddle, I was working for CALTRANS in the Bay Area of Northern California. I received a call from my grandmother – just before she passed.   She asked me to come home – to return to Navajo land – and to bring my basket filled with all the good things I had learned, things like knowledge and experience and wisdom that I could bring home to share with Navajos on the reservation. She said I needed to pack up, bring all the good that I had gained home in that basket and then turn the basket upside down and share it with my people – the Dineh. I did – in 2009. I have no regrets.”

“No hesitation, Spain and Italy. I love the people, the culture, the food, the history, the architecture. I’ve been there five times – extended trips – and I am going back again.”

“Anything that’s home-cooked. And anything that’s with family. Because I’m gone so much, I really value sitting down at the table with fresh-cooked veggies and potatoes and gravy and beef or mutton or lamb, and homemade dessert that didn’t come out of a box or plastic bag.”

“I struggle with this, for I see so many needs among my people on the Navajo Reservation. But first, I would give money to schools so they create advanced programs for the youngsters, give them life skills and genuine job training. Second, I dedicate money to fund programs for the elderly – things like providing better transportation, improved health care and facilities, and enhanced educational opportunities that fit their interests and needs.”

“My real favorite, when I was a kid, was Easter. We’d have Easter egg hunts, and then family get-togethers where we would tell stories and enjoy huge family meals and laugh a lot. But other favorites were Christmas and Thanksgiving, where we’d eat too much and then play board games and card games. But I also have to include the Navajo ceremonials like the Beauty Way, where we are taught never to harm another human being. Or the Blessing Way, where we try to restore equilibrium to the universe. Those are an important part of my internal spiritual beliefs.”