You are here: Home / FBN Spotlight / Tilling the Learning Landscape 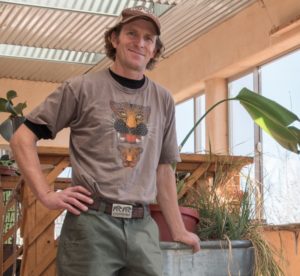 “Growing up, we had Hopi friends who were gardeners. I always enjoyed creating spaces. It was a form of play.”

A native of Flagstaff, his career path always included some form of gardening or landscaping. He worked in nurseries and as a private gardener for about 10 years.

“I did ecological restoration work on the lower Colorado River,” he said.

In 2009, Taylor developed an interest in education as more schools were looking for support in sustainable practices.

“In gardening, there is something for every student. There are roles for everyone in a garden from the scientist, the earth movers, the organizers, to the artists and poets. It helps them discover a little about who they are.”

Taylor is concerned that a lot of kids don’t spend that much time in nature and don’t develop a relationship with nature, which he says helps them in every other facet of their lives.

An instructor in the Ponderosa High School gardening program, Taylor has cultivated a $2,500 grant from APS and the Phoenix Suns to enlarge its already existing irrigation project that captures and stores rainwater for irrigation.

Using money from the grant, the students will use a 1,500-square-foot section of rooftop to design and install a larger system that will harvest rainwater that will be stored and later used for a landscape projects. The 75 students involved will learn about weather patterns, energy, water and soil and the physics of effectively moving water.

The goal is to move water from the roof collection area and send it to a high point on the property using 1,800 gallons more captured water for their orchard and food garden, he said.

The award was announced in early November 2017 and the expansion project has already begun.

The grant is part of a $50,000 pot given to schools state-wide to inspire the next generation of STEM (science, technology, engineering and math) professionals.

A gardener by trade, Taylor started a non-profit organization called Terra BIRDS, and was contracted by Ponderosa High to head up the gardening program.

Terra BIRDS educates and empowers youth through gardening to help prepare them as the stewards of a sustainable future for humanity. The organization is committed to outdoor, experiential learning that addresses health and happiness, sustainability, STEAM education and the environment. It does this by developing and maintaining school gardens, supporting teachers and striving to be positive leaders for young people.

Taylor says the dedication to gardening he witnesses from the students is nurtured by becoming acquainted with nature, the environment and the community that surrounds them.

The project at Ponderosa started in 2010 when he built a small greenhouse on the campus.

“The students are the stewards of that site,” he said. “We planted orchards, food and native plants for native habitat. The key thing is we really focus on making it an irrigation-free landscape. We collect rain water with cutouts on the streets which flow into a basin of water. Excess roof water is also captured and sent to the basin.”

They have been doing this for the past eight years.

Terra BIRDS is currently in more than 12 schools with similar projects all at different stages, with four paid staff members.

“Kids of all ages love being outside and having gardening spaces,” he said. “The benefit of these garden programs is that it helps young people get outside and get their energy out. They develop teamwork skills, critical thinking and problem solving. It is good exercise and kids like the idea of growing their own food,” said Taylor.

“John has just got an incredible integrity about his work for the planet, for the kids and about teaching them about leaving the planet in good shape when we are all gone,” said Jason Minshew, a longtime friend and landscaper. “He is trying to infect them with the bug that got into us and to teach them about nature and the world.”

“I very much value the open spaces and public accessible land,” said Taylor. “I have a basic respect, love and relationship with nature.

Taylor and his wife, Erica Sareio, an artist, are raising their son, a sixth grader.

“I often procrastinate on things I should be doing by going outside to do garden work.”

“I really enjoy Mexican food and tacos of all kinds.”

Who inspired you to do what you do?

“If I had to narrow it down it would be everyone from childhood like people from the neighborhood, a Hopi guy named Elmer, Greg Glassco and educators like Jim Davis.”

What character trait do you admire most?

“Hard work and dedication. People who work hard and see something through.” FBN

John Taylor is cultivating STEM skills and a respect for nature in his students at Ponderosa High School.