You are here: Home / Sedona / Touching the Future through Scholarships 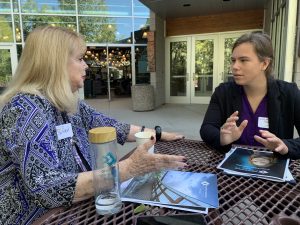 Emily McKenzie has been giving a voice to matters important to her community since she was in elementary school. As a fifth grader, she collected signatures from her classmates and petitioned the school board to put a salad bar in her school’s cafeteria. The board agreed with her case. From then on, lunchtime became a bounty of fresh lettuce, tomatoes, carrots and cucumbers.

As a teen, McKenzie studied Human Rights Watch, a powerful non-government organization that seeks to investigate issues, expose the truth and advocate for meaningful change.

Today, the 19-year-old’s interests lie in political science and journalism. She is enrolled in the CCC2NAU program at Coconino Community College. Through the new Mary Jo West Excellence in Communication Scholarship, she has a team of support – including financial assistance and also personal mentorship from Arizona’s pioneering primetime anchorwoman herself and Emmy-award winning career journalist, FBN Editor Bonnie Stevens.

“Journalism plays a critical role in the preservation of democracy and it is vital to prepare young people to study journalism and seek the truth,” said West, the longtime KOOL-TV anchorwoman and Arizona Broadcasting Hall of Fame recipient who went on to join the CBS news anchor desk in New York.

West and FBN Editor Bonnie Stevens created the scholarship and met up with McKenzie, the scholarship’s first recipient, at the CCC Students First Scholarship Celebration on the Lone Tree campus in September.

“Part of me is interested in working internationally,” she said. “I would also like to use my degree to get involved in politics on a more local level and impact change in a community I care about. Ethics has been one of my favorite classes at the community college so far.”

“We loved Emily immediately and feel so blessed to get to know her,” said Stevens. “Emily is exactly the kind of young woman we want to see succeed in the world. She is smart and driven, loves nature, adventure and being outdoors – she hikes, skis and plays rugby on the NAU women’s club team – and also has a deep interest in promoting the good in the world.”

During the breakfast celebration, CCC awarded $240,000 in scholarships to more than 120 students. “We had over 200 guests in attendance,” said Chief Development Officer Dianna Sanchez. “It is an honor to be able to give our student scholarship recipients a celebration worthy of their accomplishments and to be a part of their educational journeys.”

Like McKenzie, whose older brother is also in college, many scholarship recipients are grateful for the aid because it helps ease the financial burden on families that have more than one young person earning a degree.

“I am so grateful to all the scholarship donors who are willing to invest in my future and the CCC Foundation Board for general scholarships I have received, which cover all of my tuition,” she said. “It takes the stress off of myself and my family and has meant that I didn’t have to get a job right away and can focus more on my education.”

McKenzie learned about the CCC2NAU program through a college fair in Alaska. She says it was that program that attracted her to Flagstaff from her home in Anchorage, along with the beautiful mountains of Northern Arizona.

CCC2NAU Manager Robin Long calls the program the perfect vehicle for students who want to start in a smaller environment than a university and save money on tuition. “This innovative joint admission program between CCC and NAU is now in its 14th year and makes up a third of the enrollment at Coconino Community College,” she said. “It’s unique because students can still have the university lifestyle. They can live on campus, get a meal plan, buy an NAU Recreation Center pass and join clubs. It’s also advising-centered. We can tell business, forestry or journalism students with confidence that 100% of everything they are taking will transfer to NAU.”

West is celebrating her birthday on Nov. 12. She says her birthday wish is for others to support the Mary Jo West Excellence in Communication Scholarship. Those interested in donating to CCC2NAU scholarships can do so by going to coconino.edu/scholarships. FBN

For an in-depth interview with Mary Jo West about her career in broadcasting and her current work bringing water to an African village and helping orphaned children there, watch Zonie Living at StarWorldWideNetworks.com.

One of the benefits of the Mary Jo West Excellence in Communication Scholarship is mentoring offered by West, meeting here with scholarship recipient Emily McKenzie on the Coconino Community College campus in Flagstaff.Courtesy photo by Larry Hendricks