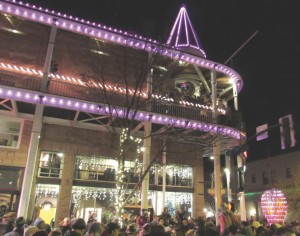 At the most recent iteration of Flagstaff’s official welcome to the new year – the Pine Cone Drop – thousands of people stepped out of nearby restaurants, bars and hotels to witness the first of two celebrations centered around the Weatherford Hotel. Flagstaff Mayor Jerry Nabors addressed the mob of revelers, asking who was visiting from out of town. A collective cheer erupted, indicating the vast number of guests in the crowd. After officials lowered the metal pine cone in synchrony with the new year’s arrival, many of the visitors headed back in to the warmth for food, drink and sleep. Thus passed 2015 into 2016, seamlessly transitioning from a year of unparalleled visitation in Northern Arizona into a new year that local tourism representatives anticipate will continue to be strong.

Staff members at Flagstaff hotels, restaurants and attractions are now totaling their 2015 attendance and related income levels. Even without these totals, one thing is clear: 2015 was a record year for tourism in Northern Arizona. Nearly every attraction and visitor service, for instance, showed healthy increases over 2014. Through May alone, based on numbers supplied by the Flagstaff Convention and Visitors Bureau (FCVB), the Flagstaff Visitor Center was up 5%, Lowell Observatory showed a 16% increase, and the Museum of Northern Arizona was up 24%.

For Lowell, that percentage jumped even higher with activities surrounding the July 14 flyby of Pluto by the New Horizons Spacecraft. Lowell’s previous high watermark for attendance was 80,595, achieved in 2008. Lowell communication manager Josh Bangle said Lowell’s 2015 attendance easily eclipsed that number, totaling somewhere in the vicinity of 95,000. That marks an 18% jump over the previous high, a number that Bangle attributes to several factors, particularly the Pluto flyby, which brought 7,000 visitors during flyby week alone.

Bangle said other reasons for Lowell’s healthy attendance included the Clark Telescope coming back on line and expanded hours that were standardized to consistent times throughout the year. He also cited the efforts of the FCVB. “I believe in the City of Flagstaff and what the visitors bureau is doing to promote all the businesses in Flagstaff as a destination town. Flagstaff is no longer just a stop along the way to the Grand Canyon, but a destination itself.”

JoAnne Hudson, public relations specialist at the FCVB, supported Bangle’s observation. She said, “Fifty-three percent of people who responded to our visitor survey last year said Flagstaff was their primary destination. This ‘Flagstaff as a destination’ idea is one of our goals at the FCVB, and we expect that number to continue to climb.”

Speaking of the Grand Canyon, it also drew record crowds, eclipsing 5.3 million visitors – an all-time high – before December even arrived. This represented a healthy increase in overall National Park visitation, attendance numbers that will likely stay strong next year as the National Park Service celebrated its centennial with a year of special events and program nationwide.

Hudson said that not only was visitation at attractions up in 2015, but so was hotel occupancy. Through November, Flagstaff hotel occupancy was up 6.3% while the revenue per available room – the amount of money charged per room – was up 14.7%. She said, “In 2015, tourism in Flagstaff was off the charts. In July, we had our best month of hotel occupancy on record. Through each season we continued to see records numbers and our shoulder seasons are getting shorter as more visitors come throughout the year.”

She says the FCVB’s increased marketing in the Phoenix Metro Area – including temperature-themed advertising campaigns – have proven successful. Related to this is Governor Ducey’s declaration of Flagstaff as Arizona’s official Winter Wonderland.

Many factors led to a successful 2015 tourism season in Flagstaff, and Hudson is guardedly optimistic that visitation in Northern Arizona will stay strong in 2016, good news for the hotels, restaurants and attractions that rely on the tourism industry. FBN