You are here: Home / Local News / Tusayan Feeling Left Out of Flagstaff Discussion 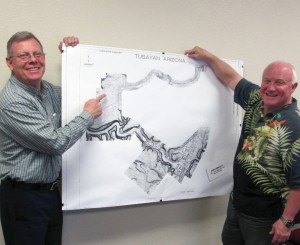 A recent resolution by the Flagstaff City Council opposing Tusayan’s plans for development has left Tusayan officials scratching their heads. Tusayan Mayor Greg Bryan and Town Manager Will Wright said they were never invited to participate in the conversations about the resolution, which they found odd since the issue is centered right in their backyard. Plus, they could have accurately explained their plans.

The controversy stems from the Town of Tusayan’s proposal to develop a pair of parcels of land for residential and commercial use. The plan calls for some 3,000,000 square feet of commercial property, a staggering amount in the eyes of environmentalists concerned about the source of water to operate such facilities and the impact on local and regional ecosystems. Business owners are also concerned because of the resulting increase in competition.

The parcels can only be reached by crossing over Forest Service land. Gravel roads currently provide access, but these would have to be improved to adequately serve the developments. Tusayan has thus requested an easement from the National Forest Service that, if approved, would afford the appropriate improvements.

The easement request raised the hackles of many Flagstaff business and environmental leaders. This culminated in the Flagstaff City Council’s decision to add an agenda item to its March 10 meeting to discuss and vote on the resolution. Kaibab National Forest Supervisor Mike Williams was on hand to explain the Forest Service’s procedure for evaluating the easement request, and various Flagstaff residents and business owners shared their concerns during a public comment period.

One resident, Gabor Kovacs, voiced strong opposition to the resolution on the grounds that the issue wasn’t Flagstaff’s business. Kovacs told the Council, “I ask you, how would you like if the City of Tusayan or Williams or Phoenix or East Berlin would tell you how to conduct your business and what to do in your town and how to approach it? I don’t think we should meddle, I don’t think we have any reason, any motive beside arrogance, to tell Tusayan how to do their thing out there.”

Bryan, in a March 19 letter printed in the Arizona Daily Sun, agreed with Kovacs’s view. He said it is “surprising that one municipality would take the unprecedented action of interjecting itself in another town’s economic and quality of life decisions.”

But the majority of commenters saw the problem differently from Kovacs. Flagstaff hotelier Ash Patel said, “You as council have a fiduciary responsibility to protect Flagstaff and its citizens, its quality of life, the bed tax, everything else. So when we look at this whole debacle up at the Canyon we need, as a city, to address this, and see through everything, protect the canyon, protect local businesses, and that includes even the businesses up in Tusayan.”

In explaining the easement request, Williams later said, “The town [Tusayan] is interested in widening the road, paving the road for increased traffic, and putting utility corridors in underground. And that’s pretty much it. In and of itself this is a fairly low impact kind of a deal. You’re improving a road and adding a utility corridor alongside of that road. It’s everything else that’s happening on the private land parcel that the roads are accessing that’s got everybody stirred up and that’s why all of this is so controversial.”

Bryan says that had he been at the meeting, he could have clarified these plans and shared a more accurate perspective of what Tusayan is trying to do and why it is involved with the project. “I’ll give you two words: Affordable housing. Period. That’s why we incorporated, and that’s why we have this relationship with the developer. Out of 558 people in the 2010 census, when we incorporated, there were six private homes, and those were all landowners.” Wright added, “Everyone else lives in employee housing.”

Bryan says that the affordable housing effort was part of a larger plan to develop a community residential culture in Tusayan. “Right now, we have a community of employees, not a community of residents. But if you can own your own home, you become involved. You have a willingness to get involved in your school board and your fire department and your planning and zoning and different committees, help create a sports recreation complex for your kids to play in – you develop roots.”

When the idea of incorporation first came up years ago, Bryan was against it because there were no provisions for affordable housing that would allow residents to live there and develop a community. The latest effort that led to incorporation, however, took this into account. “The developer said if you’ll incorporate, and you’ll work with us to do a reasonable development, and negotiate with us in fairness, we will give you 40 acres of land to build affordable housing, and we will bring the utilities to that property. When I heard that, I said, ‘Sign me up!’ Now we can grow our leadership, we can have residents that have a vested interest.”

Bryan understands the plan is controversial and will continue to experience opposition. He said, “The environmental community, several local businesses, the National Park, and now you have the business community of Flagstaff coming out, and the number one issue is water. But in our agreement with the developer, we spell out that they have to provide the water and it has to be an approved source.”

If the water issues aren’t resolved, the easement is not granted, or a number of other requirements are not met, Bryan knows the project could stall or simply fail to develop. But he remains optimistic. “I go back to the two words of why we’re doing this – affordable housing. It’s not economic development from our point of view. That’s the reason the developer wants to get involved, but we’re here for affordable housing. By creating this, we are allowing people to have a dream; to live here, have roots, and be able to build something for their kids in the future.” FBN