By Flagstaff Business News on August 31, 2014 in Business, Community Profile 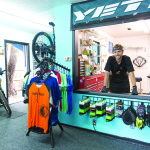 Flagstaff is a year-round sports town. When it is time to hang up the mountain bikes, it is time to take out the skis and snowboards.

No one knows better about how difficult it is to maintain a seasonal business than those who cater to one or the other.

Two Flagstaff businessmen put their heads together and figured out how to cater to both by using the same space seasonally.

In the summer, Scott Heinsius, owner of Cosmic Cycles, puts his wares front and center in the store. In the winter, Robbie Kerr, owner of First Chair, moves his winter sports equipment to the front of the store while Heinsius moves to the back room. When spring comes, they change places again.

“It’s working out really well, Heinsius said. “The public has been receptive and they seem to be very interested in the concept.”

Heinsius says Cosmic Cycles was looking for a new location just off the Highway 180 corridor last year when he spoke with Kerr. After a conversation, Kerr was open to trying this unusual business model.

“His business is very seasonable and he was looking for a way to keep the doors open year-round,” Heinsius said.

Kerr says the arrangement made sense.

“Scott came to me and knew my building was empty for the summer time and the ski area was closed,” Kerr said, who opened First Chair in 1998. “He clears out on Oct. 31 and on Nov. 1, I open the ski shop and offer pre-season tune-ups and repairs.”

Heinsius said he pays rent to Kerr and during the winter he conducts his parts and repair business from the back room. Many of his customers mountain bike all year, seeking lower elevations when the snow flies in Northern Arizona.

“It’s more economical. During the summer I can afford to be here and in the winter my overhead drops. It makes sense for both of us,” Heinsius said. “It’s a symbiotic relationship.”

Kerr says having Heinsius on board takes some of the pressure off First Chair. “The ski shop still has to pay rent even if the building sits empty.”

“I’ve been at this 15 years and last year was the first year that Snowbowl offered snowmaking for the entire season,” Kerr said. “It was the only thing that kept the ski area open. If there wasn’t snowmaking last year, we would have never unlocked our door.”

Still, the mortgage on the building he bought five years ago must be paid. To make ends meet and to keep the ski shop open, Kerr fishes commercially in Alaska in the summer, his offseason.

There have been good years and bad years, but Kerr says it is his loyal customer base that keeps him in business.

First Chair rents snow skis, snowboards and related equipment. It offers full service tuning and repairs. This year, Kerr will provide both snow finishing and belt finishing. During the winter season, First Chair is open seven days a week from 7 a.m. to 6 p.m. Sunday through Thursday. On Fridays, it stays open until 9 p.m. so that people can rent equipment for the next day. To learn more, call 928-556-9096.

Cosmic Cycles is a full service bike shop with an extensive line of repair parts, rentals, demos and bike sales. Heinsius said although Flagstaff is a mountain bike town, he is hoping by next summer he will be able to offer road bikes. The business is open seven days, from 9 a.m. to 6 p.m., Monday through Saturday and on Sunday from 10 a.m. to 5 p.m. To learn more, call 928-779-1092.

Both businesses are located at 612 N. Humphreys St. in Flagstaff.