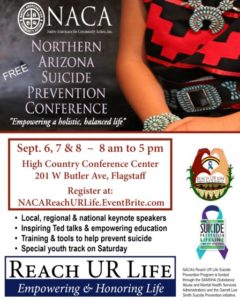 o   In the U.S.: It is estimated that 1 in 20 individuals contemplate suicide sometime in their lives; this number is significantly higher in our young people aged 10 to 19 years old where suicide is the second-leading cause of death.

o   In the U.S.: An increased number of middle-school-age children are attempting suicide as a way to cope with the many social, school and family dynamics they are dealing with.

o   In Arizona: The rate of suicide is three times the rate of homicides and there is one successful suicide death every seven hours.

o   In Arizona: The rate of suicide is much higher in the Native American population than in the general population.

o   In Coconino County: Between 2010 and 2016, an average of 26 people committed suicide each year and nearly 1,800 hospital-related visits occurred with the highest number reported each September.

o   In Coconino County: In 2016, among the suicides of individuals under 25 years old, half of them were among Native American youth.

The subject of suicide carries the stigmas of depression, mental illness and death. Most people don’t know how to talk about it, much less how to help someone they fear may be contemplating suicide or is a suicide risk. One of the best things to do is learn to recognize the warning signs of someone who may be experiencing suicidal thoughts.

Native Americans for Community Action (NACA) Reach UR Life Suicide Prevention Program is sponsoring the sixth annual free Northern Arizona Suicide Prevention Conference 8 a.m. to 5 p.m., Thursday, Sept. 6, through Saturday, Sept. 8. This year, a third day has been added to the annual conference and includes a youth track on Saturday for parents and teens to attend.

The conference aims to educate parents, youth and providers in the community about the issue of suicide as a public health concern, and to introduce individuals, families and communities to tools to help prevent suicide and to deal with the after effect of suicide in a family or in schools.

This year’s conference will include national and local speakers whose topics and presentations that will resonate with everyone in attendance. These experts come from a vast array of perspectives and experiences, and each brings a wealth of knowledge and insight related to the devastation of suicide and suicide prevention. Presentations include lived experience, historical trauma, cultural preservation, ethical and legal issues, bullying, resiliency and more.

To register, visit https://nacareachurlife.eventbrite.com. One ticket per person; no group registrations. Space is limited, so cancel your ticket if unable to attend after registering. For more information, call NACA’s Reach UR Life Program at 928-526-2968.

NACA’s Reach UR Life Suicide Prevention Program is dedicated to identifying and offering support to individuals who are exhibiting signs of, and who are at risk for, suicide. The goal is to provide individuals with the tools and skills they may need to confront a possible suicide by training community members how to identify and possibly intervene with individuals who may be at risk for suicide.

The safeTALK training is designed to offer hands-on skills to everyone16 years and older and requires no formal training or prior experience in suicide prevention. Those younger than 18 years old must have a signed parent permission form to participate in the training. During the half-day training, participants will learn safeTALK skills that those assist individuals in identifying and intervening in the early stages of suicide. This type of knowledge and skill development strengthens the community so those at risk of suicide can be helped before they act on their suicidal thoughts.

Applied Suicide Intervention Skills Training (ASIST) is a two-day interactive workshop in suicide first aid. ASIST teaches participants to recognize when someone is at risk for suicide and work with them to create a plan that will support their immediate safety. Although ASIST is widely used by gatekeepers, such as clergy, teachers, elders and healthcare providers, participants don’t need any formal training to attend the workshop – anyone 18 or older can learn and use the ASIST model.

There is no greater way to share your compassion and skills as a community member than to participate in one of the FREE Suicide Prevention courses that NACA offers each month. Suicide is preventable and through shared efforts and proper training, we can all help to make it a less of an impact within our Northern Arizona’s communities.

If you are having suicidal thoughts, please reach out to our NACA professionals who are trained to assist individuals with their needs by calling 928-526-2968 or after hours call the National Suicide Prevention Lifeline at 1-800-273-TALK (8255). If you need immediate help, please call 911.

About NACA: NACA embraces a holistic, integrated approach to caring for the whole person. Blending general health and wellness, behavioral health, community services, exercise, nutrition and support groups, results in healthier individuals, families and communities. NACA offers integrated care to all people of all cultural backgrounds, which include behavioral health services, lifestyle change classes and a low-cost fitness center, all at the same location. To learn more about all the services and programs NACA offers, visit NACAInc.org or call 928-773-1245. Stay up to date on new services, events and health topics by following NACA and NACA Reach UR Life on Facebook.

Cheryl Blie is the director of Community Development and the Reach UR Life program manager at NACA, Inc.