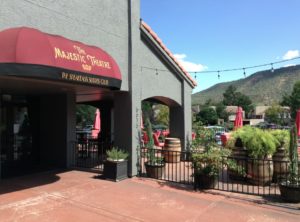 The Village of Oak Creek’s Sedona Village Factory Outlets is being redeveloped by a new owner, with plans to revive the vacant former IMAX theater, to attract new retail and dining options and to turn approximately a third of the nine-acre property into a 117-room “Element by Westin” hotel.

Rebranded as Sedona Vista Village, the 90,000-square-foot property has historically struggled to retain both franchise and independent retail tenants; the occupancy rate has remained near 50 percent since 2008. Though the property was not officially on the market, Phoenix-based real estate attorney and investor Marty Aronson approached the previous owners through real estate agent Jack McMahon of John D. Miller Real Estate Services. Aronson, a part-time Sedona resident and head of Sedona Pine Tree Ventures, LLC, purchased the property in February from Oak Creek Development, LLC.

Striking the all-important balance between catering to locals and visitors is top-of-mind for Aronson. “We have to [please] both to be successful,” he said. “It’s a unique and beautiful place and we have to serve local folks, but if you want to have a vibrant community for retail, you must attract tourist trade for it to work in terms of offerings.”

Current tenants Famous Footwear, Tuesday Morning, L’eggs·Hanes·Bali·Playtex and Kitchen Collective will remain, with Tuesday Morning reopening in a remodeled space by the end of October. Verizon Wireless/Russell Cellular joined the property earlier this year and will also remain. Ideally, Aronson is looking for two more restaurants of different types and retail tenants that make sense for the place and project.

The relationship with Starwood Hotel & Resorts/Marriott International and the keystone Westin commitment originated from Aronson’s existing link to Scottsdale-based hotel developer Glacier House Hotels, which opened an Element in Chandler recently and was keen on the idea of opening one in Sedona, said Aronson.

Featuring mostly suites with kitchenettes and other on-site amenities targeted to travelers staying several nights, the “boutique” hotel includes rooms “designed as free-flowing space” and is intended to be LEED certified, maximizing sustainability throughout from building materials to a recycling program.

“It’s a very nice hotel product that does not exist in the VOC,” said Aronson, noting that conference rooms are part of the plan. “It will add a positive choice for travelers.” The hotel is scheduled to open in late 2018.

The first new tenant to open will be the Majestic Theatre & Speakeasy Supper Club. Taking over the property’s 6,500-square-foot theater, its lobby and patio, this concept is the brainchild of Jeff Schutt, who closed his Speakeasy establishment in Carefree to open this one after he was approached by Aronson.

“The hotel going up next door was a huge reason why I said yes,” said Schutt. The remodeled theater will seat 170 guests in traditional seats, dining tables and plush seating. Planned entertainment includes monthly comedy nights on the first Thursday, weekly classic movie nights on Sundays, live music on Saturdays and a “Vegas-quality” burlesque/variety show on Fridays, according to Schutt.

Adorned with a 1920s Prohibition-era style décor, the restaurant will seat 100 (inside and outside) and serve a wide range of appetizers starting at $10, as well as steaks, seafood, burgers, flatbread dishes and a diverse wine selection. The Speakeasy plans to be open Wednesdays through Sundays.

“Jeff is the right guy to make it work,” said Aronson. “This space has been underutilized for many years and we want to make it a special part of the Sedona area.”

Though it has several moving parts, Aronson said the project is “right on schedule.” Refurbishment of the legacy buildings that will remain has begun with a month of roof work, and demolition of the northern end to make way for the hotel is planned for early November. Aronson is talking to several potential retail and restaurant tenants, though he is facing some skepticism. “We are having discussions with a lot of people,” he said. “Most people would like the hotel construction to begin.”

Job creation is estimated to be in the hundreds when all redevelopment phases are complete. Plans for the hotel have been submitted to the county; zoning is flexible in the area along State Highway 179. Aronson is not looking for investors as he and his current partners “have a long-term outlook to make it a special place.” One indication that Aronson is doing things differently: his marketing consultant, Patty Johnson, crowdsourced the rebranded property’s logo online.

“I’m very excited to be involved with the transformation of this property,” said leasing agent McMahon. “It takes a visionary like Marty to see the potential that this property has. I look forward to working with him and his team to bring new life to the VOC.” FBN