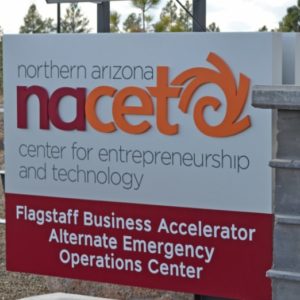 After a pipeline is put in, a bridge built or a skyscraper constructed, who can tell you years later whether it is still structurally sound? We have all heard of devastating situations where pipelines have burst, bridges failed and buildings fell. But there is a way to ensure that these structures are still safe. There are a variety of techniques, including ultrasound and radiographs, categorized as Non-destructive Testing or NDT.

We live in a world of aging infrastructure as well as new construction. More certified NDT inspectors are needed every year with thousands of jobs needing to be filled.

Enter Warrior 2 Inspectors (War2In) founder, Kenny Greene. He loves what he does and is driven to train veterans to fill these jobs. His goal is to provide veterans a challenging and solid work opportunity. His commitment and pride are evident in the classroom and workplace he has developed at NACET that includes high-tech NDT equipment along with a foosball table for downtime. War2In is built for the transition from military life to civilian life. Greene is about not only teaching trades, but ensuring employment, with a safe and secure job transition. While other NDT training programs exist, none others are designed to put their graduates to work. War2In’s graduates will have knowledge in the NDT industry, several hours of field application, income opportunities and an almost guaranteed job at the end. Students in the course are also paid as they practice the NDT in the field during the course.

Greene is an internationally recognized practitioner and teacher of NDT, with three decades of experience on multiple continents. However, he didn’t initially think that he would be helping veterans. While he inspected military sites, he never thought he would focus the business on veterans, “For 20 years, I thought someone else was going to do this,” Greene said. “I guess I was the one to do it.”

What set the initial spark was a family reunion event in 2014 where Greene was discussing with a military family member how difficult it is for veterans to transition to civilian life. It was merely months later when the momentum would take Greene to creating a business plan, applying to NACET, hoping to have his validity confirmed with an acceptance letter.

“It was incredible,” Greene said as he recalled being accepted as a resident at the NACET facility. “For so long I shared the idea while I was traveling. Getting that letter was validation that this was going to work.” From there, War2In moved into the NACET Accelerator the next year and began changing lives of citizens and veterans getting into the workplace.

The War2In curriculum is challenging. It requires 40-plus hours a week with three semesters of training, and eight certifications as recognition. Students face a basic screening test, an aptitude test, and after being accepted, the training begins. Starting with classroom training, to indoor simulations, then outdoor training, finally students are presented with jobsite access. The jobs are endless and internationally offered. “The industry is booming,” Greene said. “Nondestructive testing has increased 11 percent per year since 2008. It’s projected to increase over the next five years by 40 percent.”

“[Students] show up with pocket change. To see them a part of society with jobs is incredibly rewarding,” he explained. “We’ve definitely found an edge in the industry. It’s not too good to be true.”

Even STEM is a part of the American Society for Nondestructive Testing (ASNT), both organizations teamed up this year to be partners with promoting the importance of science and engineering in communities.

For now, Greene is focused on how to ensure his next class of students will have jobs by graduation. His plans include expansion and having alums mentor the students. If you are interested in learning more about Warrior To Inspector, check out war2in.org. FBN

Alaina Souers is the content marketing specialist at NACET. She can be reached at 928-213-9234.

Can You Sell Your Home Without a Realtor?
New Snow Play Area for ‘Arizona’s Winter Wonderland’