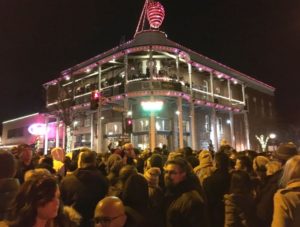 What has been a celebrated sign of the season in downtown Flagstaff for 20 years, the LED lighted Great Pinecone is scheduled to be hoisted into place atop the historic Weatherford Hotel during the Thanksgiving weekend.

Positioned three stories above the intersection of Leroux St. and Aspen Ave., the seven-foot-tall, metal ponderosa pinecone is the New Year’s Eve symbol of hope and new beginnings for the Northland. Throughout the holiday season, the festive ornament and decorated hotel will light up the cool mountain nights and serve as the centerpiece of the decorated historic district.

“The Pinecone has taken on a life of its own, making appearances on news programs and in travel magazines across the country,” said Weatherford Hotel co-owner Pamela “Sam” Green. “We are so honored that residents and visitors ‘come home’ to Flagstaff and the Weatherford for the holidays,” said hotel co-owner Henry Taylor. “We truly feel the Weatherford is for us to share and it is just a beautiful thing to see thousands gather for the Great Pinecone Drop every year and honor the historic building.”

As has been the case for two decades, there will be two lowerings for the 2018 Great Pinecone Drop on Monday, Dec. 31: one at 10 p.m., to accommodate families with young children and to coincide with East Coast celebrations; and one at midnight.

Both events will include music and sing-alongs, an inspirational message from Flagstaff Mayor Coral Evans and a massive countdown led by local DJ Mario as thousands fill the blocked-off streets to ring in the New Year. Fireworks set off by the City of Flagstaff will punctuate the moment as the mountain town ushers in 2019.

“This iconic event has been gaining steam over the years and is becoming known with both the domestic and international visitors,” said Flagstaff Convention and Visitors Bureau Director Trace Ward. “The winter holiday time period in Flagstaff is popular with our in-state visitors, Southern California, as well as some international markets such as Australia, Mexico and China.”

Live music will be offered on all floors of the hotel: Big Chad & the Southern Gentlemen will be performing in The Gopher Hole from 9 p.m. to 2 a.m.; and, Rich Neville and the Monday Night Blues All Stars will be in Charly’s Pub from 6 to 10 p.m. Outside, baristas will be serving warm beverages from a coffee/hot chocolate station. All are encouraged to prepare for cold winter temperatures and possibly snow.

“Flagstaff is so fortunate to have a vibrant downtown and one that celebrates the New Year in style. I urge all locals and visitors to come experience it for themselves,” said City of Flagstaff Economic Vitality Director Heidi Hansen. “Congratulations to Henry and Sam on the 20th anniversary of the Great Pinecone Drop at Weatherford Hotel!”

The Great Pinecone Drop is free and open to the public. For reservations to the VIP Golden Ticket Event, call Weatherford Hotel Special Events Coordinator Klaudia Ness at 779-1919, ext. 430. FBN