You are here: Home / Business / Weatherford Hotel to Ring in the New Year with Great Pinecone Drop 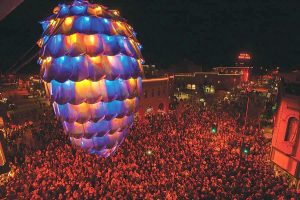 With residents and visitors ready to usher in a New Year of hope, health and good cheer, Weatherford Hotel owners have announced the return of the Great Pinecone Drop to historic downtown Flagstaff and also the VIP Golden Ticket Event inside the grand Victorian building, offering crackling fireplaces, prime rib, a champagne toast to 2023 and a front row seat to all the action.

“We can’t wait to welcome the crowds back for the Great Pinecone Drop on New Year’s Eve,” said Henry Taylor, who owns the Weatherford Hotel with his wife, Pamela “Sam” Green. “It brings us so much joy to be able to share this elegant hotel with residents and visitors. It has been a true labor of love to restore it to its turn-of-the-century, early 1900s grandeur and continue to make it a special place for all to experience.”

The 70-pound, six-foot tall, LED lighted metal Great Pinecone has been secured in place to hang from the building’s cupola like a bright, uniquely Flagstaff holiday ornament. Meanwhile, the Weatherford Hotel team is decorating the three-story building inside and out as chefs plan for what may well be the biggest New Year’s Eve celebration Flagstaff has seen in years.

“So much has happened since our last Great Pinecone Drop with crowds in 2019, and perhaps now more than ever, America is ready to start fresh with a New Year filled with possibilities,” said Green. “We are so honored to set the stage for a renewed wave of gratitude and goodwill toward each other and optimism for what lies ahead!”

On Saturday, Dec. 31, three Great Pinecone Drop events are planned: noon, 10 p.m. and midnight. “The noon activity is great for younger kids and there will be an event leading up to it in Heritage Square put on by the Downtown Business Alliance,” said Weatherford Hotel Event and Sales Manager Kim Ward.

For evening activities, the City of Flagstaff will be blocking off the downtown streets with the expectation that thousands of revelers will participate in New Year’s Eve celebrations. The city is planning to set off fireworks following the 10 p.m. and midnight countdowns.

Inside the hotel, popular local band Jimmy and the Entertainers will be performing in The Gopher Hole Pub. Prizes will be given away on every floor on the hour from 9 p.m. to midnight.

“Our mountain town is known for its holiday magic with its beautifully adorned downtown, exceptional local restaurants, award-winning breweries and charming one-of-a-kind boutiques. Of course, we are hoping for snow, which will just top off the festive season!” said Discover Flagstaff Director Trace Ward. “We have so much praise and appreciation for Sam and Henry, who have made the holidays incredibly special with two decades of the Great Pinecone Drop tradition.”

Henry and Sam started the free Great Pinecone Drop on Dec. 31, 1999, to honor the Weatherford Hotel’s 100th anniversary of opening its doors as a hotel on New Year’s Day, Jan. 1, 1900. For 20 years, thousands have gathered in the streets on New Year’s Eve to sing carols and other favorite songs and cheer as the Great Pinecone was lowered. It was offered as a virtual event in 2020 and canceled in 2021 because of the national surge in COVID-19 cases.

The VIP Golden Ticket Event is the Weatherford’s premier New Year’s Eve party, served with food, music, a midnight champagne toast, and access to the Zane Grey Ballroom and wrap-around balconies offering a close-up view of the evening’s program and Great Pinecone Drop. Reservations are required for the 21+ only VIP Golden Ticket Event and may be secured at https://weatherfordhotel.com/events/2023-vip-golden-ticket-new-years-eve-in-zane-grey-21-event/.