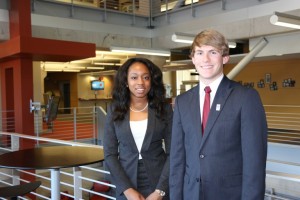 Grace Aire-Oaihimire and Alex Hayes in the W. A. Franke College of Business.

Before Alex Hayes began Dale Carnegie training at Northern Arizona University, he said remembering names was difficult. Now when he meets new people, he focuses on techniques that make it easier to recall individuals’ names in the future.

“It’s about relationships. You have to make connections with people to be a good leader,” said Hayes, who is looking at leadership in a new way as he prepares to graduate from the W. A. Franke College of Business in May.

Dale Carnegie was a well-known orator and self-help author whose books, including “How to Win Friends and Influence People,” sold more than 15 million copies. Carnegie was born into poverty in 1888 and cultivated his natural abilities to help himself and others succeed in business environments. He concluded that successful people throughout history were masters of communication skills, and through his Dale Carnegie Institute set forth to train others in people skills and public speaking.

The merits of Dale Carnegie’s principles recently became clear to Hayes when he and 19 other NAU students visited with Warren Buffet, one of the world’s wealthiest businessmen. The only diploma on Buffett’s office wall shows his completion of the Dale Carnegie training.

Buffett shared wisdom and insights with the visiting students. He said, “many people say cash is king but it’s what you do with it and how much your money can do for others that matters,” recalled Hayes, a principle similar to ideas found in Carnegie’s teachings.

“I have always been very shy, so hearing about the Dale Carnegie training and how it teaches you to not only increase your professionalism, but win friends and influence people, really inspired me to sign up for it,” Aire-Oaihimire said.

The Carnegie teachings also will help Aire-Oaihimire and Hayes, who work as ambassadors for the college, hosting events, leading college tours, acting as liaisons with other departments and serving as resources for peers.

NAU is a pioneer by being the first university in Arizona to offer Dale Carnegie training to undergraduate students, said Bernadine Lewis, director of undergraduate programs at the college, which is subsidizing a large portion of the program’s cost for students.

“One of the things The W. A. Franke College of Business is known for is professionalism. It’s a characteristic we work hard to help our students develop,” Lewis said. Dale Carnegie training is the highest professional development a person can have and students will be learning about effective networking, etiquette, proper demeanor and conversation skills, Lewis added.

Along with a one-day Dale Carnegie training this month, designed especially for NAU students, individuals inFranke’s Business Leadership Program have the opportunity to attend this spring’s eight-week-long training, an impressive supplement for their resumes.