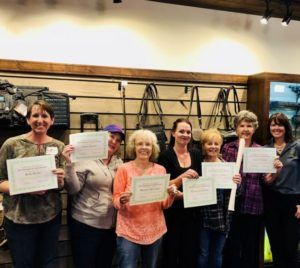 Did you know that women are the fastest growing demographic when it comes to firearm ownership?

Firearms historically have been considered a man’s world but gun stores and ranges are getting the hint and becoming more women-friendly, welcoming and catering to women more than ever before. The result is that women are feeling more comfortable going to their local gun store, shooting range and formal training events.

According to a recent study by Pew Research, there are 25 million women in the United States who own guns, a 77 percent increase since 2005. The number one reason cited for purchasing a firearm: Personal protection. Women are taking control of their own safety, and it shows.

Here are some more facts about firearm ownership from Pew Research:

Approximately 62 percent of gun owners in the U.S. are male.

One in five women report they own a gun.

Women are more likely than men to cite protection – rather than recreation – as the only reason they own a gun. Women who own guns are less likely than their male counterparts to say they go sport shooting or hunting, though substantial numbers of women do so.

Equal shares of men and women gun owners, about one in four, say they carry their gun outside their home all or most of the time.

More than 75 percent of male and female gun owners consider the right to own guns to be essential to their personal sense of freedom.

Unfortunately, I frequently hear women talk about their well-meaning husband or boyfriend who bought them a gun and they just don’t like it. They are eager to learn to use a firearm and the first step is to find the correct firearm. The best way to find the right firearm is to visit a gun store and see all the options available, hold the weapon, try shooting different models before purchasing and learn about all of the options available. Just like shoes, firearms are not a one-size-fits-all purchase.

In addition to finding the right gun, there are numerous accessories such as concealed carry purses, holsters and tactical clothing – all made for the ladies. No more trying to “fit” into a man’s world.

Women also have access to instructional classes taught by other women who understand some of the challenges, concerns and even fears women face when learning to shoot and carry a firearm. It can be intimidating to take that first firearms class and having a woman instructor can make it much easier.

National organizations such as The Well-Armed Woman have upwards of 350 chapters with more than 12,000 members across the U.S. Flagstaff has its own chapter at Timberline Firearms. The group is so popular that there is a waiting list to join.

Timberline Firearms & Training has more than 40 different rental firearms so first-time or seasoned shooters can find what works best and what they like most. Once the correct firearm has been found, the next step is professional training on the basics of handgun safety, handling, storage, use and laws. Responsible firearms owners recognize that marksmanship is a perishable skill and respect the importance of regular practice. FBN