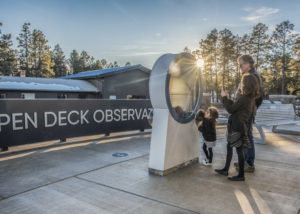 Effects of the collaboration between Lowell Observatory and the Jim and Linda Lee Planetarium at Embry-Riddle Aeronautical University (ERAU) are going to be “astronomical,” said Planetarium Director Eric Edelman.

Edelman is referring to the recently-formed partnership between the two world-famous scientific facilities. In brief, Lowell Observatory and ERAU are going to partner in sharing research and public programs about the cosmos.

“Above all, we wanted assurance that our partnership would strengthen scientific awareness throughout the entirety of Central and Northern Arizona of what these two institutions were doing to expand knowledge of the universe,” Edelman said.

He describes Lowell Observatory, located on the western edge of Flagstaff at 1400 W. Mars Hill Road, as “one of the foremost astronomical research facilities in the U.S.”

The observatory has operated for more than 125 years, making findings and other educational information available to the public.

“Thousands and thousands have visited the observatory that Percival Lowell founded. And now, we at ERAU have a direct link where we can partner with Lowell in creating even more awareness,” he said.
One example Edelman cited was the “Lowell42 Lecture Series,” begun in April 2017. This ongoing series brings world experts before the public for lectures about connections between science, space, physical theory and the universe.

“We’ll be streaming those crowd-pleasing lectures into the planetarium and inviting the public to attend,” said Edelman, who earned bachelor’s and master’s degrees in astronomy and worked at the California Academy of Sciences before joining the staff at ERAU in 2017.

He said ERAU would share its popular 360-degree, 4K films, which have been projected in the 47-foot diameter dome at the planetarium. “We’ve found our audiences in the community to be quite sophisticated. They’re eager for more astrogeological and aastronomical events. We’ve several more programs under development.”

Past programs include, “Our Friends, The Planets,” “Supermassive Black Holes in the Local Universe,” and laser light shows accompanied by popular music.

ERAU STEM Outreach Director Sarah Vincent says the partnership gave her and her colleagues at the ERAU STEM Center an opportunity to expand even further into schools. “We’ll plan special events to incorporate programs from Lowell. My goal: to provide information that will help students at all levels achieve their greatest potential.”

Longtime Prescott residents Jim and Linda Lee, who endowed the ERAU planetarium, said they were excited about the potential programs. Since the planetarium opened two years ago, it has attracted more than 40,000 visitors. An estimated 15,000 have been students from area and regional schools. Others have come from throughout North and South America, Europe and Asia.

“All of us at the university are supportive of this cooperative effort between these two highly respected scientific programs,” said ERAU Chancellor Anette Karlsson. “Everyone will benefit from these programs, which will be shared.”

Lowell Observatory is in the midst of a $29 million expansion project called the Astronomy Discovery Center. Plans call for a main exhibit hall, a children’s zone, a theater and several specialized resource rooms to be completed in spring 2023.

“The cumulative impact of the partnership between these two institutions will have informational and scientific impact we can’t begin to imagine. The sky’s the limit,” Edelman said.