You are here: Home / Community Profile / Could Flagstaff Be Rocked? Geologists Watching for Earthquake Activity; Officials Planning for Action 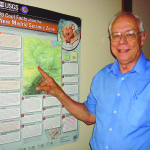 Like a swarm of bees, a seismic swarm is something geologists say we should be paying attention to, particularly since Flagstaff falls in the second highest earthquake hazard zone in the state and the crust in Northern Arizona is expanding.

The top hazard zone is in Southeastern Arizona, where an earthquake registering a respectable 5.2 on the Richter scale shook the town of Duncan on June 28.

“The 5.2 magnitude is about where you’d begin to see some damage if you’re close enough to the actual epicenter,” said Dave Brumbaugh, Ph.D., director of the Arizona Earthquake Information Center on the Northern Arizona University campus.

But even though there was a seismic swarm of activity there recently, Brumbaugh says scientists were surprised by the magnitude of the quake. “Anything in the five or six range would definitely get our attention and would cause some damage.” And, he adds, that is realistically the magnitude Flagstaff could expect.

“The crust is stretching, if you will, or lengthening. And so, as these old fractures that are already there in the rocks respond to that, you’re going to get fault slip and so basically everything from west of Flagstaff – let’s say around the Williams area over just a little bit to the east of Flagstaff – is the zone that we call the Northern Arizona Seismic Belt. And this activity can be traced from Blue Ridge up through Flagstaff, up through the canyon and up into Utah where it merges with the Intermountain Seismic Belt.”

Brumbaugh says Flagstaff has a history of sizeable tremors. In 1906, 1910 and 1912, earthquakes with magnitudes of six or more were felt in town.

“The city was very small at the time, but basically it was scary enough to frighten the population. A lot of people ran out of buildings, Emerson School was evacuated, and some chimneys fell. But that was a fairly deep earthquake. If we were to have one that close that was shallow today, given our population base, I think we would expect worse effects.”

The longest fault in Northern Arizona is the Anderson Mesa Fault near Mormon Lake. Professor Brumbaugh says it is more than 20 miles long and the north end reaches almost to Interstate 40, into Flagstaff’s city limits.

“If, in the worst case scenario, the whole fault moved, it could conceivably produce an event as large as about 6.9. That would mean a tremendous amount of damage in Flagstaff,” he said. “We’re talking about roads disrupted, water lines out, maybe disruption of power such as electricity, some buildings collapsed, several hundred injuries and there might be as many as 14 deaths.”

Most likely, he says, the Anderson Mesa Fault would produce something smaller like a 6.7 or a 6.2. The last seismic swarm there was in 2011, more than 25 miles underground. Nonetheless, government officials have been preparing for such an event.

Coconino County Emergency Manager Robert Rowley says the Emergency Operations Plan outlines a set of procedures and processes that would be followed in the case of a disaster.

“We do an analysis of the different hazards we face in our area, rated by the likelihood that they would occur along with the impact that we would incur,” said Rowley. “An earthquake is a high impact disaster, but we don’t have a strong history of earthquakes in Flagstaff, like, say, Los Angeles does, so it gets rated more toward the middle.”

The potential hazards that get the most attention in the Flagstaff area are wildland fires and flooding. But, says Rowley, who came to Flagstaff from California, earthquakes are taken very seriously.

In fact, Coconino County will be participating in the Great Arizona ShakeOut at 10:16 a.m. on Oct. 16. That is when millions of people worldwide will be practicing how to drop, cover and hold on.

“You might be sitting in your office when we start the earthquake drill,” said Rowley. “You might want to get under your desk, keep yourself in place for the one minute that the drill lasts, then look around for things that could fall over and hurt you.”

The Great Arizona ShakeOut is primarily about awareness, says Rowley, designed to encourage us to reassess our offices, homes or classrooms to make ourselves safer.

“That’s really what it’s all about: making sure we have our own family emergency plans, emergency kits, battery-powered radios, and that we’ve signed up for CodeRED (a mass community emergency notification network). Once we’ve made ourselves ready, we can see what we can do to help everyone else so that we are part of the solution to the big disaster.”

Rowley says he is confident in the county’s ability to respond to an earthquake or other hazard. “I do feel that we are very, very prepared for disasters that may come our way. If a quake affects downtown Flagstaff, almost immediately the event could be more than we can handle with our own resources. But we have relationships in place to provide the level of assistance and recovery that would be necessary.”

June’s earthquake near the Arizona/New Mexico border was the largest in the state since the 1993 Cataract Creek earthquake, which was northwest of Flagstaff and registered 5.3.

The U.S. Geological Survey’s National Seismic Hazards Maps released July 17 maintain that the country’s earthquake hazard is highest on the West Coast, in the intermountain West and in regions of the Central and Eastern United States. However, Arizona ranks among the 42 states with a “reasonable chance” of having damaging ground shaking from an earthquake.

For more information about the Great Arizona ShakeOut, visit http://shakeout.org/arizona/