By Nancy R. Harrison on November 2, 2010 in Business, Tourism 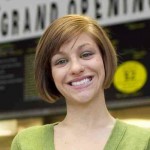 She’s clearly a young woman on a mission: “I want 15 stores by the time I’m 30,” said restaurant owner and Northern Arizona University (NAU) junior, Chelsea Hulina. How can she pull off school and work? “Time management is key. I outsource responsibilities to people who are more qualified. I have friends in accounting who help me, and I train my staff well so they will operate the restaurant while I’m in class,” she explained.

Hulina is one of many NAU students and alumni who currently operate a restaurant in Flagstaff. It’s becoming fairly common, although NAU doesn’t have any statistics about what happens to these students after graduation.

Hulina and her business partner, Frank Klein, moved to Flagstaff from Pittsburgh. Last December, they opened up East Coast Deli, 1300 S. Milton Avenue, near Discount Tire. “I opened a deli because there are only a few delis in Flagstaff,” Hulina said. She said she and Klein complement each other well, as they both have internal drive and he brings with him years of experience working in his family’s deli back in Pittsburgh. “This is about passion, making people happy, and creating repeat customers,” Klein said.

Last August, Hulina opened the second East Coast Deli location. This one is on the campus of the Coconino Community College (CCC). She owns the deli at CCC, while Klein now owns the restaurant on Milton Avenue. Still, they continue to share marketing, accounting and day-to-day business ideas.

Flagstaff has many restaurants, so what makes the East Coast Delis stand out? “We make Pittsburgh-style food. We have a signature way of making sandwiches. We put your coleslaw and fries on top of your sandwich,” Hulina said.

While Hulina continues to run the restaurant and go to school during the week, across town, an NAU alumnus creates his own signature dishes.

Scott Heinonen isn’t new to Flagstaff. The 1994 NAU graduate of the College of Hotel and Restaurant Management cooked for others all through college. After graduating, he cooked in Oregon and California, before coming back to Flagstaff. “After a while, you might as well work for yourself,” he said.

So, he opened Tinderbox Kitchen, 34 S. San Francisco St. in downtown Flagstaff. “It’s nice to come back and do this for the community. Plus, Tinderbox is a fine restaurant with an entrepreneurial spirit,” he added.

Like Hulina, Heinonen is clear to point out to NAU or other students that owning and operating your own restaurant is no easy feat. “TV has glamorized cooking. Reality shows like Top Chef and those…. to a certain degree, cooking is not at all glamorous. It is very hard work, with long hours. But, I love to cook. I’m creative. As a chef, you use all of your senses on a daily basis, and we change our menu every night,” Heinonen said.

Last June, another recent NAU graduate from the College of Engineering and Natural Sciences opened The Juice Box. Tucked away next to Flagstaff Sports Exchange at Aspen and Beaver is Eric McGregor’s gift to those looking for healthy juices, smoothies and snacks. “I want to offer something healthy; I’m into natural foods and eating healthy,” McGregor explained. “I chose Flagstaff to open my business because this is a healthy, active town. I create several good products. Everything is fresh, no preservatives. I can put together juices to help fight against anemia, diabetes, and more. I make one called B-Happy, it has fruits and vegetables and is high in vitamin D, B-six and B-12.” And the outside of the establishment does resemble a juice box.

McGregor says he can’t be financially successful in Flagstaff after November’s cold temperatures hit, so he will temporarily move the juicing trailer to Tempe for the winter. He’ll be back in Flagstaff in April. FBN

Nancy has a master’s degree in journalism from Northwestern University and a bachelor’s in radio/television from The University of Arizona. She has extensive writing experience starting as a radio then television reporter in Tucson. She enjoys writing print stories about the outdoors, businesses, health, and education. Nancy teaches at Northern Arizona University. She also has a public relations business drafting stories and coordinating special events for businesses. She currently resides in Flagstaff with her husband and two children.
View all posts by Nancy R. Harrison →