By Patty McCormac on October 17, 2010 in Business, Local News 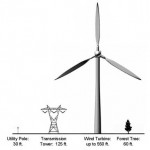 Plans for a wind farm near Williams are moving forward with an agreement between NextEra Energy Resources and Arizona Public Service.

“We signed a long-term power purchase lease with NextEra Energy Resources on July 22,” said Steve Gotfried, spokesman for Arizona Public Service. “What will come next will be development and building the Perrin Ranch Wind Energy Center about 13 miles north of Williams.”

He said it will be a 99 megawatt wind farm with 62 wind turbine generators, which, when operating at full capacity, will provide enough energy to supply 25,000 homes at any given time. It could be up, running and providing power to customers by 2012.

There are still several hurdles the project must clear before construction can begin,including approval by the Arizona Corporation Commission and the Coconino County Planning Commission. Construction could be underway as early as summer 2011.

Not everyone is happy about the project, as seen at last month’s community forums. Citizens of Valle showed up, as did people from Howard Mesa Ranch, home to 50 full-time and 250 part-time residents. Some said they were worried the 262-foot tall turbines will ruin their views, disturb wildlife and interfere with the dark night sky. They fear the power generated will not be used locally, but sent out of the area.

Lisa Paffrath, vice president of the property owners association at Howard Mesa Ranch, says she and other residents are not against renewable energy projects.

“All the studies done are [that a wind farm] is not suited for this area. We are on the low end of the amount that can be generated. We are not in the prime area for wind,” Paffrath said. She says the impact on the area will be great and even the county has been fight- ing to keep this natural corridor to the Grand Canyon pristine.

Paffrath says after the initial construction, only about eight to 10 people will be em- ployed full-time to maintain the project.

“We’d be better off building a Home Depot that would create 100 jobs,” she said. “All this is doing is destroying this pristine corridor, the most beautiful thing I have ever seen in my life.”

Steve Stengel, spokesman for NextEra Energy, explains that the area was picked for several reasons. There is a good amount of wind, there are nearby transmission lines already in existence, and because the state owns part of the property, the permit process could be streamlined.

He says the project is for Arizona Public Service. “The power we generate will be put on the grid and APS will use it for its customers,” he said.

Stengel adds that the project is a significant distance from the Grand Canyon.

He says his company has planned the project so it will have minimal impact on the environment.

He says during the initial construction phase, about 250 workers will be needed and as many local people will be hired as possible.

As for the full-time jobs, he says he expects to bring in a manager who has experience at another NextEra Resource wind facility, who will try to hire the other positions locally. “We think this is a good project. We have spent a lot of time and effort to bring the best possible project we can create. We have done and continue to do a number of studies so there will be the minimum impact possible.”

He said the project is clean energy that does not require water and does not create carbon emissions of any kind.

Gotfried says the state of Arizona has mandated that Arizona Public Service increase by 15 percent the energy it provides as renewable by 2015.

“We are constantly looking for renew- able sources for renewable energy,” he said.

The subject will be discussed at the Coconino County Planning Commission in October or November and Paffrath says she intends to bring a contingent of residents to object to the project.

“Do they [the commissioners] under- stand the impact on the land and home values? Instead of seeing the north rim or the south rim of the Grand Canyon, we will see these turbines,” she said. “I’m still in shock.”

She said the turbines will be seen by 90 percent of the residents of the ranch.

NextEra is owned by Florida Power and Light. FBN

View all posts by Patty McCormac →