You are here: Home / Columnists / A Simple Guide to Getting People Hooked 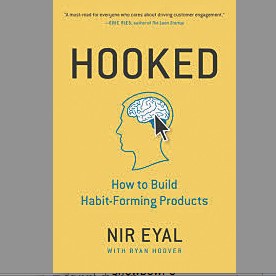 Not necessarily. What if you created something no one particularly wanted because it doesn’t exist yet, but you could make people want it? You could even make them kind of addicted to it so they would want it all the time for forever. If you did that, you’d make a lot of money. Because then, the thing you invented would be The Next Big Thing.

That, in a nutshell, is what “Hooked” is about. Author Nir Eyal (with assistance from Ryan Hoover) explains how to develop and sell habit-forming products that become so habit forming you have to buy them. And I’m not talking about substances recently legalized for recreational use in Colorado. I’m referring to products people use daily to enhance their experiences and make life easier (okay, I’m still not talking about those recently legalized substances).

Eyal began studying consumer compulsions after receiving his MBA at Stanford. Part of a team funded by Silicon Valley investors, he studied how to integrate advertising into online games. There were companies “selling digital cows on digital farms while advertisers were spending huge sums of money to influence people to buy whatever they were peddling.” According to Eyal, “I didn’t get it.”

I have to admit, as a former purchaser of digital cows, I don’t get it either. Why are we willing to spend enormous amounts of money to own things, sold in digital games, that don’t actually exist?

The answer is that technologies like Facebook, Google and online games are habit forming. And, as Eyal points out, not all habits are bad. While eyeballing your cell phone every few seconds to check out the latest text, tweet, or Pinterest of sexy new hairstyles might annoy your dinner date, it also keeps you informed. These technologies are addictive because they serve a real purpose (like keeping us connected). They are engineered to elicit actions that give us positive feedback. It won’t work for every product, but for many, Eyal writes, it’s a matter of designing them according to the Hook Model.

First there has to be a Trigger – emails, links or app icons that alert you to products and tempt you. Clicking on them is the Action that pays off with something you like. According to Eyal, “levels of the neurotransmitter dopamine surge when the brain is expecting a reward.” They are especially attractive if you’re never quite sure what you’ll get when you click. “Introducing variability multiplies the effect, creating a focused state, which suppresses the areas of the brain associated with judgment and reason while activating the parts associated with wanting and desire.”

And, I’m still not talking about recreational substances.

But, when you click, you get the cat video you were looking for, and an array of other things from which to choose. Finally, the last step is the Investment. That means that you put time, effort, money, data or social capital into your use of the product or service. When you customize your Pinterest page you’ve invested something that will increase the chances that you’ll use the service again.

What about moral issues? Eyal admits his Hook Model can as easily be used for good or bad. But, habit-forming technology “is already here, and it is being used to mold our lives.” And, face it. Good people will design things for good purposes, and bad people will probably do the opposite. Eyal’s goal is “to provide you with a deeper understanding of how certain products change what we do and, by extension, who we are.” For those who prefer not to be hooked, the book may guide you in avoiding temptations that habit-forming products offer.

If you can’t fight it, just download my new HookZ–App. It’s totally worth the time AND money you’ll invest. FBN