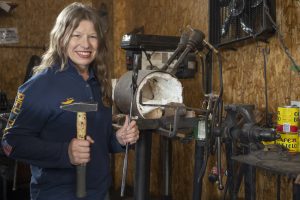 Missing the collapse of the San Francisco Bay Bridge by seconds during the 1989 Loma Prieta Earthquake is just a shadow of the blessings, hardships and successes of Pieh Tool Company President Amy Pieh’s remarkable life.

“I was on the top of the Bay Bridge and I didn’t feel anything, but the second I got off, the bridge was swinging,” she said.

Brought up in a maze of tools in Burlington, Wisconsin, Pieh’s parents, Bill and Bonnie, owned an internationally known tool company, Centaur Forge, that served blacksmiths and farriers all around the world since 1960. “When my dad died in 2000, it was such a loss to the industry.  People came from all over; it was amazing.” Amy lost her mother 18 months later.

Caring about others was the No. 1 priority for her parents, says Pieh, and through the business, they made a lot of friends. “Their goal was to provide a vast selection of products for the best value,” she said.

Joining the U.S. Air Force after high school, Pieh landed in the San Francisco Bay area. “I couldn’t fly due to a depth perception issue, so I became a metallurgical inspector.  In this assignment, I did non-destructive inspection, where I inspected every part of aircrafts, all the way down to the oil. After separating from the military, I continued as an inspector in aerospace and gravitated to inspection at power plants, nuclear and fossil fuel.”

For a short period, Pieh returned to Wisconsin to help her mother with the business. “I realized there was more to my returning home than just helping out. I was preparing to carry on a 40-year family [business] tradition.” Blacksmithing itself is a 61-year Pieh family tradition.

A visit to Sedona clarified her future. “I was coming into the Village of Oak Creek and just around the first bend by Bell Rock, a vision of my mom and her wonderful smiling eyes came about and I could hear her voice saying, ‘Do it right here.’ So I got an [real estate] agent and found a building in Camp Verde.”

Seeking help from the Small Business Administration mentoring program, Service Corps of Retired Executives (SCORE), Pieh was able to move forward. “They were a great help developing my business plan and gave me direction to continue my parent’s legacy.”

On May 17, 2003, she says people came from near and far to attend her grand opening, a big event that she hosted five months into her pregnancy.

Down the line, hardship ensued and Pieh almost lost the business, but as a single mother, managed to pull through. “The towns of Camp Verde and Cottonwood embraced me and helped me and my son, William.”

Along with her main office in Camp Verde, Pieh has another retail location in Cave Creek and a third tool mail order business in Anthem.

“I met Amy in Wisconsin through my daughter, Sara, who was also in the Air Force,” said Pieh Tool Company Graphic Designer and close friend, Ann Jackson, who works at the Camp Verde shop.  “Amy is one of the most incredible women I’ve ever known and to do what she has done is incredible.  She continues to amaze me!”

A walk inside Pieh Tool Company in Camp Verde is a well-stocked and immaculate menagerie of blacksmithing and farrier tools, a full wall of horseshoes, anvils, swage blocks, abrasive tools kits, stands, forges, hammers, art supplies for blacksmiths, patinas and everything from aprons and books to beginner blacksmith kits.

There’s even a line of tools under the Pieh Legacy Collection, including a series of blacksmithing tongs named Billy to honor her late father.  “I have my own line of hammers, too, and hoof knives called Billy and Bonnie, also named after my parents.”

“I love working for Amy,” said new employee, Pieh Tool Company Accounting Manager Jackie Bonney. “She is a brilliant woman and as a woman and single mother, she has done everything on her own. Sometimes I have to laugh because it’s such a whirlwind around here, but I have so much admiration for Amy and I can’t believe she’s done so much, especially going through COVID. People don’t realize the impact of not being able to get products and the cost of freight that changes hourly. It’s very difficult but she’s kept people working through all of that.”

Blacksmithing and knifemaking classes are popular at Pieh Tool and are held monthly, nine months out of the year. Master Bladesmith Raymond Rybar, one of 150 Master Smiths registered worldwide by the American Blacksmith Society, is an instructor, along with Prescott-based Oso Blanco Ironworks owner Dylan Cook.

“Amy has done a great job creating a resource for blacksmiths in tool distribution and educational opportunities,” said Cook, who has taught beginning blacksmithing classes for six years at the Camp Verde location.

“I believe my mom and dad would be very proud that I was able to establish Pieh Tool Company and carry on the traditions that they practiced for most of their lives. I could not have done any of this without their inspiration, motivation and incredible example. FBN