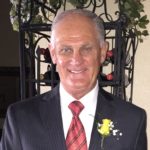 With his familiar voice, schoolboy enthusiasm and mischievous smile, Dave Munsey has been riding the Arizona airwaves longer than anyone else in the broadcast news business: 42 years. Never at a loss for words, a friendly greeting or a funny joke, the Arizona Hall of Famer and Emmy-award winning weatherman still has a lot to say and has poured a life of excitement, celebrity, lessons and luck into his deeply human book, “Munsey Business.”

The Jamestown, North Dakota native has been working since he was eight years old, shining shoes, delivering newspapers and serving customers in his dad’s restaurant and bar. Although his work ethic is as strong as a Midwestern cornstalk, after reading the book, you will soon discover it is his gift of understanding and enjoying people, his nimble wit, cunning mind and power button that is stuck in the “on” position that fortified his place in the fiercely competitive large market radio and television world for five decades.

Munsey Business is as much a “how-not-to” as it is a “how-to” book. It is the perfect summer read for those who don’t mind laughing out loud in an airport terminal or on a sandy beach. There are also painful stories that will put a vise-grip on your heart as he explains the tragic death of a friend’s two-year-old that sent him on a mission to try to save lives. He began his “Watch Your Kids Around Water” program in 1980.

“It’s a book of short stories, 103 chapters, not one relates to another,” he said. “Every chapter is a short story on its own, written in chronologic order.” 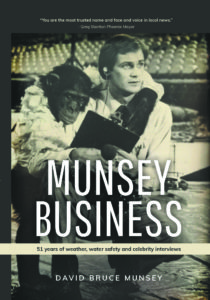 Growing up third in a family of nine kids, Munsey describes his childhood home as noisy, full of children, “not all of them Munseys,” where you could literally “write on the walls,” at least in the bedrooms.

Munsey recalls the moment he knew what he was born to do. It was a typical day in the household involving teasing his sister and running, screaming and proclaiming victory. His mom, Dorothy, and her friend, Lorene, were having coffee. Dorothy was unaffected by the chaos, but Lorene grabbed young Dave by the back of his shirt.

“Lorene put her finger in my face and changed my life forever when she said, ‘I hope you get paid for that big mouth of yours someday.’ I was 10 years old, and that moment has been frozen in time ever since…I had been told I had a big mouth many times…but I had never been told that I could make money from my big mouth. If this were true, I was set.”

Munsey talks about how he handled rude job interviews, terrible bosses, being stalked, and working the 2 to 6 a.m. shift in Phoenix radio. But mostly, this natural storyteller shares the joy and creativity of radio and the exciting, evolving years of television.

For Munsey, radio was a playground with an endless cast of characters he could invent and invite in for a conversation. For television, it was teamwork, a can-do attitude and a sense of family that he loved and kept him at Channel 10 (first KOOL, then KTSP, now Fox10) for 42 years.

“Dave was a real trendsetter for TV weather people,” said 602 Communications Television News Consultant Doug Drew, the KOOL-TV 10 p.m. news producer in the ‘80s. “In the early days, most TV weather people were science geeks. Dave was one of the first TV weather people to show a real personality, a mix of entertainment and meteorology. He knew weather, but he was also a real showman. Funny and entertaining. Viewers quickly recognized his engaging personality and his popularity took off.”

In the race for ratings, Munsey describes how Channel 10 was hungry to be first. “We were the first microwave shot people, the first satellite people and the first live shot people in the country. The station owner, Tom Chauncey, Sr., took about three seconds to make a decision and we were buying technology fast. We found out the night before Channel 12 (KPNX) was about to go live for the first time. We learned we could get a live shot if we pointed our transmitter at South Mountain from the helicopter. We put a harness on the videographer so he could lean out of the helicopter and point the transmitter.”

Channel 10 went for it and succeeded in getting the first live shot, although fuzzy. The station also got a note from Channel 12 congratulating the team, saying it was “crude, but live.”

Munsey captures the down-to-the-last-second kind of magic that happens in live television. He describes how the station decided to go for a split screen showing north and south borders of the state at the same time. On one side, viewers would see Arizona Road personality Bill Leverton at the Grand Canyon with a shot into Utah; on the other side there would be Munsey at Kitt Peak National Observatory in Southern Arizona with a shot into Mexico.

Munsey’s team arrived at about 4 p.m., plenty of time to set up for “Live at 5.” What they didn’t expect was the metal-reinforced steel gate chained shut, keeping out anyone who wanted access to the high point of this national treasure. Munsey writes, “I was standing just looking at the chain around the gate when the live truck engineer said, ‘I’ve got a hacksaw in my toolbox.’ I could have kissed him. ‘Get it,’ I said. ‘We’re breaking in.’”

It may have been a federal offense, but they got the live shot, with no time to spare.

“Dave was just as funny in the newsroom as you saw on the air. Maybe funnier,” said Drew. “He was always cracking jokes, always a trick up his sleeve from the moment he stepped into the newsroom each day. A joy to work with, Dave brought a level of levity to the newsroom, normally a place of high stress and tension.”

“Munsey Business” chronicles significant historic events like the Vietnam War and what it meant to American servicemen and women when Bob Hope arrived in Long Binh with his Christmas show. Munsey was there, serving in the Army, and shaking Hope’s hand backstage.

He talks about the late ‘70s and early ‘80s, working with people like pioneering anchorwoman Mary Jo West, gruff news legend Bill Close, helicopter pilot/hero Jerry Foster and up-and-coming newswoman Linda Williams. “When you’re young, back in those days when you’re all kids, you’re grabbing onto the brass ring. We were not only on our own, we were a team as well. We were family.”

“He always would stop at my desk with a story that was funny, interesting or hysterical. What amazed me was he was constantly upbeat! He’s one of those guys who you want to order whatever he had for breakfast, because he always walked ‘on the sunny side of the street!’ (pun intended!),” said Williams, who refers to him as a “Koolie,” referencing their KOOL days. “I have told Dave Munsey a million times that he should write a book, because no one can tell a story with the wit that he can. I was thrilled when he finally did write down some incredible stories that you couldn’t make up if you tried.”

Munsey offers respect and praise for his station owners, managers and co-workers. He is especially grateful to his high school English teacher Bruce Berg, to whom he dedicated the book. “If one person had more influence on my life than anyone, it was Bruce Berg. He helped me get into speech class. He approached me on an adult level, told me that I had the X factor, the ability to win over an audience. He helped me with my writing, and he taught me about improv, to be given a topic and then talk about it intelligently for five minutes, how to ad lib, to tell the story as the story should be told.”

In the book’s Forward Berg writes, “There is a bounce and vigor in Dave’s style that shouts that this man loves what he is doing.”

A chapter also is dedicated to his wife of 47 years, Bunny, who saved every note, newspaper clipping and photograph of his career.

For long-time Arizonans, “Munsey Business” is deliciously cuddly and familiar like comfort food. It reminds us of iconic restaurants like Durant’s in downtown Phoenix (where Munsey earned his own booth, number 28), and old friends like Glen Campbell and Ladmo.

Munsey retired in June 2017 and has received a number of awards in his career. Mary Jo West successfully nominated him to be inducted in the Arizona Broadcasters Hall of Fame.

If he were to offer just one tip for a half-century of broadcasting success, it’s on page 165: “If you physically touch someone, shake their hand or give them a hug, they will watch you.”

Indeed, Arizona will no doubt continue watching as Munsey soldiers on in his mission to save lives. He is the official spokesman for “Teach Kids to Swim” at the Valley of the Sun YMCA.

What’s your next adventure?

“I’m thinking of writing another book about, called ‘Did You Hear me?’” (A follow up to his “Watch Your Kids Around Water” program.)

Who do you admire?

“Jim McCord was a high school basketball coach in Jamestown, North Dakota. The team was going to the state. Days before the tournament, he found out his star player had been drinking. The coach suspended him. He gave up a state championship for principle.”

What advice do you have for aspiring broadcasters?

“Ignore any criticism. You feel it. Everybody feels it.”

What character traits do you most appreciate?

“It was like I had a really good friend staying with me. And then he left.” FBN

“Munsey Business” is available at Changing Hands bookstore in Tempe.