You are here: Home / Local News / Astronauts are Back, Training in the Dark 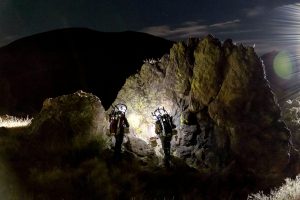 Space-suited astronauts are training again on Babbitt Ranches, preparing for the manned Artemis mission scheduled to explore the lunar South Pole in 2025. The goal is to find ice, which may enable future explorers to set up a space station on the Moon and serve as a launching pad into deeper space.

“Because of where Artemis and VIPER [a planetary rover set for launch next year] are landing, the angle of the sun is really, really low. Craters may contain ice that never sees the sun. The astronauts are going to have to work in dark regions, so they have been conducting nighttime tests on Babbitt Ranches using a portable sun – a large spotlight-type device – to learn how they can operate safely on the Moon,” said USGS Astrogeology Science Center research geologist Jim Skinner, who works with NASA’s Desert Research and Technology Studies (Desert RATS).

Babbitt Ranches’ dark skies and rugged Moon-like landscape have been critical elements for astronaut training and space equipment testing for decades, dating back to the USGS Moon mapping and Apollo astronaut exercises of the 1960s.

“Being close to Flagstaff was very critical to the Apollo missions for getting data sets and starting a machine shop for manufacturing equipment for astronauts,” said Skinner, who’s in charge of the USGS group that creates maps for all planetary bodies beyond Earth.

“This area was the training field for rover testing, spacesuit testing, communications scenarios – whatever they thought was going to happen on the Moon. We have a lot of different kinds of lava flows, we have Meteor Crater as an impact crater, so there are lots of different sites that are easily accessible up here, good for transporting material, people, equipment and technology on to the field and testing those things.”

Then and now, the Desert RATS carry out experiments at Babbitt Ranches locations such as Black Point Lava Flow and SP Crater.

“The Babbitt family and Babbitt Ranches have been extremely supportive and open to helping with all the different things that are happening with NASA,” said Skinner. “The Babbitts have been there playing a historic role with the use of their land. It’s such an easy place to get to with a range of geologic units and terrains. It’s invaluable for training. We wouldn’t be able to do a lot of this without the Babbitts’ help.”

As the No. 1 map maker in the world, the USGS Astrogeology Science Center has the delicate job of mapping places no one’s ever been. This summer, Skinner will be training future planetary map makers on Babbitt Ranches and elsewhere in Northern Arizona, and comparing what’s actually on the ground with satellite images.

“It’s one of the critical pieces of context we have for understanding other planetary bodies,” said Skinner. “It is important to have not only the astronauts but the NASA engineers and managers come out and see what it looks like to be on the ground and to conduct geologic mapping, to conduct sample analysis, to walk up onto a rock outcrop and to break off a piece and look at it and study it and understand what it means in the context of the geologic map that has been made and is being adapted while they’re on the surface.”

“We spend a lot of time trying to figure out how we can access that information, how we can understand the geology without actually going to the surface and doing mapping like we would on Earth,” he said.

Meanwhile, rovers are back sharing the landscape with grazing cattle. Scientists like Eldar Noe Dobrea of the Planetary Science Institute and David Wettergreen of Carnegie Mellon are working with Zoë, a planetary rover prototype, teaching her to think. As expected with next generations, she and future rover robots will be more intelligent than their predecessors who have journeyed to Mars.

Across Babbitt Ranches, scientists, engineers and geologists are testing instruments on Zoë that are enabling her to make decisions, explore rocks that catch her attention and actually learn from past information. Essentially, Zoë, which is Greek for “life,” is becoming more like robots in science fiction movies.

“When we see Hollywood movies, we actually see a rover that gets sent out to explore and once in a while reports to the team and says, ‘Hey guys, I’m up here and I discovered this,’” said Noe Dobrea. “In reality, that’s not how rovers work on other planets. Right now, we are basically joy-sticking rovers. We tell them, ‘OK, we want you to move 10 feet forward.’ It moves 10 feet forward. On the next uplink or the next day, we tell it, ‘OK, that rock is interesting. Rover, we want you to move two meters to that rock.’ The next uplink we tell it, ‘Rover, we want you to extend that arm and place this instrument on that rock.’ And this goes on and on. Every single action of the rover is commanded from Earth.”

Mars rover “Opportunity,” for example, conducted science for 17 years on Mars and accomplished what could have been done by humans in two weeks, says Noe Dobrea. “Plus, additional discoveries could have been made because, as human beings walk around, they are seeing different things that are of interest. The rover doesn’t.”

But that’s about to change with software developed by Carnegie Mellon and the U.S. Geological Survey with NASA funding.

“We’re trying to advance now to the point where the robot explores on its own, so it decides where to go based on what it’s seeing and based on the geology of the site,” said Wettergreen, who created Zoë. “We have machine intelligence software that learns from prior examples that can interpret that data and determine what kind of rock it’s looking at, so [identifying] the mineralogy of the different rocks.”

Zoë’s primary instrument is the near infrared spectrometer, which measures wavelengths of minerals. “It’s like having thousands of pixels, each measuring a different color all the way out into the infrared,” said Wettergreen.

“Our eyes see three colors, red, green and blue,” said Planetary Science Institute Lab Technician Neil Pearson. “With this instrument we can see a lot more colors and it gives us a lot more information about the minerology that we’re seeing in rocks – how different elements are bonded with them. That tells us how they are formed and processes that they’ve been through.”

“You can actually identify water and you can identify what kind of minerals or types or rocks the water is trapped in,” said Noe Dobrea. “We can tell the rover we would like to find the places where we have these types of minerals because this may be where we can find life or evidence for past life.”

A laser scanner on Zoë calculates the distance to points in the field. “It kind of works like a smart bumper on your car that warns you when you get too close to things,” said Wettergreen.

“As the rover drives, it takes measurement after measurement and builds a three-dimensional model of the topography. That’s what it can use to navigate autonomously.”

Babbitt Ranches President Billy Cordasco compared the spirit of space exploration to the excitement of traveling to the New World. “In 1639, you have young Ed Babbitt in England hopping on a little boat like the Mayflower crossing the Atlantic with a few instruments and the stars. And here we are today, almost 400 years later, in front of this rover that is learning how to explore other planets. It’s just so inspiring to be with these folks who all have the same ‘Go West’ kind of attitude!”

“We are very grateful to Babbitt Ranches for making it so easy for us to access this site to drive our rover around and perform our investigations,” said Noe Dobrea. “It’s been quite an honor and this kind of work is incredible – it’s a childhood dream.” FBN