You are here: Home / Business / Building on Tradition 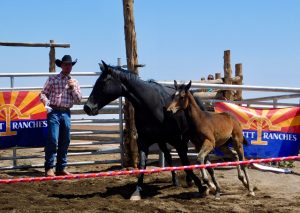 Cave Creek business owner Ty Nuessle came to the Annual Hashknife Colt Sale just to learn. “I left my checkbook at home on purpose,” he said. But just like hundreds of others in the stands, a palomino filly caught his attention. “My wife, Luisa, leaned over and said, ‘Just think how pretty I’ll look on her.’”

That’s when Ty knew they were in the game, joining other bidders in the time-honored auction held the second Saturday of July at Spider Web Camp, about a 30 minute drive north of Flagstaff.

“Babbitt Ranches has a great name and these horses have great bloodlines,” said Nuessle, a native Arizonan. “I grew up in the outdoors, hunting, camping and fishing. I’ve been on Babbitt Ranches quite a few times.”

The young palomino, will stay with its mother on the ranches for the next year before joining the Nuessle household, which includes donkeys, miniature horses, dogs, chickens, turkeys, turtles, a peacock and a longhorn cow.

At the Colt Sale, the couple beamed with joy about welcoming the newest member of the family. “I won’t ride her before she’s 3,” said Luisa.

Both Ty and Luisa were born and raised in the Phoenix area and have been around horses all of their lives. They own Roadrunner Drywall, a construction business that operates in Phoenix, Tucson and Las Vegas.

Meanwhile, Jay Holcomb came to the Colt Sale with the intention to buy. He has been building a horse program on his 52,000-acre ranch, Sky 9, near Winslow. Holcomb successfully bid on four fillies at this year’s event. Last year at the Colt Sale, he bought two. “In Arizona, you have to have horse power. Besides the romance of living the Western lifestyle, we love horses,” he says of his wife, Kelly, and their seven children.

Holcomb is the general manager of the Chrysler, Dodge, Jeep and Ram dealership in St. George, Utah and the executive manager of the Nissan store there.

“I’m an American Quarter Horse guy,” he said. “That’s why we went to Babbitt Ranches. This is a family-owned operation that has been in Arizona since the 1800s. The bloodlines are foundational. We need big, strong horses for our family and to cover a lot of ground on the ranch. These horses have a good mind and a lot of heart. They have long legs and good feet. When you go to the Babbitts, you know these horses were born in the dirt, raised on the rocks and predisposed to building a lot of muscle.”

“We’ll bring them in, love on them, put them out in the pasture for six months, trailer them a bit, and use them to gather cattle when they are about 2 years old,” Jay said of the colts. “Later, we’ll see if they will be good horses for riding.”

Two dozen colts were sold at the Colt Sale. Record-breaking bidding reached $15,500 for a stunning blue roan colt. “The horses were looking really good,” said Ed Babbitt, who served as a bid spotter at the time-honored event. “You can sure tell who the horse people are.”

“Everything was in order early this morning so we could start a little earlier in the day to avoid the heat,” said long-time Babbitt Ranches cowboy Everette Ashurst, referring to the temperatures forecast to be in the 90s. “The most beautiful part for me is watching the thunderheads build,” he said, expressing the need for rain.

Ranch Manager Clay Rodgers introduced each colt and mare and described their bloodlines, as they entered the arena. “I thank the Babbitt family for letting us keep up this tradition,” he said. FBN