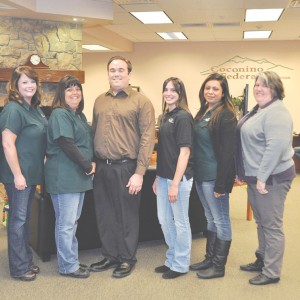 During that spring month 60 years ago (according to The Coconino Sun archives) – a pair of men’s denim slacks were selling at Penny’s for $3.49 and an automatic gas range and oven went for $155 at Babbitt’s Hardware Department. A young lad – a member of the Tall Pines 4-H Club – was raising a 385-pound calf named “T-Bone” and a “Million Volt Man” was giving a demonstration in one of Dr. Speak’s “Sermons from Science Series” in the college auditorium. In other big news, plans were underway for a “complete shopping center” with a food market, a department store, a drug store and a variety store to be built on a site fronting Fort Valley Road and North Beaver Street.

Initial deposits at the Credit Union were small enough to fit in one of the founder’s desk drawers – but in one month, by June 1955 – had increased to $200 as the membership roll tripled to 34.

Today, Coconino Federal Credit Union is a full-service, federally insured (NCUA) financial institution with $64.2 million in assets, two branches in Flagstaff and a branch in Page.

“We’re still operating under the same premise of people helping people,” said Coconino Federal Credit Union President/CEO Jennifer Harris of their steady, lasting focus six decades on. “That will always be our main purpose. Everybody gets the same great level of service.”

Through the decades and Coconino County’s almost incomprehensible changes and growth, the Credit Union has responded to evolving needs of its member depositors who are actually Credit Union owners, since anyone who opens up an account owns one voting share of the locally controlled financial institution.

“We’re always growing and always changing with the needs of our members,” said Harris, noting how the Credit Union has been member focused and low key even as it celebrates and announces the 60th birthday. “We work hard to make sure all the money we make goes back to the members,” said Harris. That translates into higher savings rates, lower fees, low loan rates and more products and services, she added.

Harris’s own career demonstrates its local and countywide roots. “I was in high school when I started,” said Harris, noting she was hired as a teller at the Credit Union while still a senior in high school. This May marks her 31st year at Coconino Federal Credit Union.

As a non-for-profit cooperative, the Credit Union is governed by an all-volunteer board elected by Coconino Federal’s members. Every year, the membership elects the institution’s leadership. The board brings a variety of financial, legal and small business experience. “They have their own expertise. They’re volunteers and we’re really grateful for everything they do,” said Harris. “They set the policies and direction. My job is to make it happen.”

Coconino Federal Credit Union is promoting its 60th anniversary in an unwavering, member-focused way. For loans originated during the month of May, the Credit Union is allowing members 60 days to make their first payment (except for short-term loans or lines of credit).

Named a “2014 Best Business of Flagstaff” organization by Flagstaff Business News, Coconino Federal Credit Union continues a tradition of financial excellence and customer service while returning value to its members – into its next decades of operation. “That’s what we do,” said Harris. “Were not flashy about it.” FBN

Coconino Federal Credit Union is in West Flagstaff at 2800 South Woodlands Village Blvd., in East Flagstaff at 2215 East 7th Ave., in Page at 112 6th Ave., and at coconinofcu.org.

View all posts by FBN →
Stroke: Preventable, Treatable and Beatable
How does Law’s Expiration Affect Tenants?