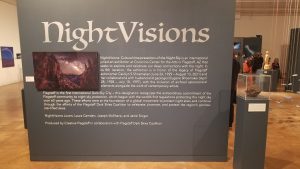 “We are grateful for the hard work of Jonathan Stone, Julie Comnick and their team, and CCA’s continuous support of the Coalition, bringing awareness to Flagstaff’s glorious dark skies.”

The legacy of Flagstaff astronomer Carolyn Shoemaker, along with appreciation for Flagstaff’s dark skies, took center stage at the Coconino Center for the Arts from May through August when the team at Creative Flagstaff, in collaboration with the Flagstaff Dark Skies Coalition, celebrated a grand re-opening of the Coconino Center for the Arts with a reception and NightVisions exhibition, following extensive renovation work.

CCA Exhibitions and Programs Director Julie Comnick described NightVisions: Cultural Interpretations of the Night Sky as “an elegant synthesis of contemporary artworks and astronomical artifacts” that brought “the vastness of the night skies into contemplative reach.”

Astronomer David Levy, part of the trio with Carolyn and her husband, Eugene “Gene” Shoemaker, that discovered the Shoemaker-Levy Comet, was the keynote speaker at the event’s opening reception. He said a comet to Carolyn was something special and miraculous. “When she found an asteroid, she’d say something like, ‘That was interesting. I’ll add it to my tally.’ But comets, they were priceless, they were beyond measure, they were holy in a way.”

Carolyn, who became an astronomer at age 51, is quoted as saying, “I do not know what I have, but it looks like a squashed comet,” while studying films that revealed the fragmented comet pulled apart by Jupiter’s gravitational pull. For more than a year, the astronomers tracked the ill-fated comet on its collision course with the giant planet. On July 16, 1994, the Shoemaker-Levy Comet dominated the news with its cosmic crash into Jupiter, viewed around the world through telescopes and on television.

Carolyn and Gene’s children, Patrick Shoemaker and Christine Abanto, were part of the NightVisions planning team. “They were always going out in the field together and working on things together, whether it was looking for comets and asteroids at Palomar or geologic field work in search of craters in Australia, signatures of impacts. They really got around the Outback,” said Patrick about his mom and dad. “Our parents were always close – she was not the wife who stayed at home – and they’d take us along on their adventures. I remember being out there camping with my parents before I was old enough to remember much of anything.”

“For bringing international attention to Flagstaff’s rare dark skies, appreciation to the legendary work of a local astronomical hero and focusing significant resources toward the NightVisions effort, the Flagstaff Dark Skies Coalition recognizes Creative Flagstaff as a Dark Skies Champion,” said Coalition President Chris Luginbuhl. “We are grateful for the hard work of Jonathan Stone, Julie Comnick and their team, and CCA’s continuous support of the Coalition, bringing awareness to Flagstaff’s glorious dark skies.” FBN