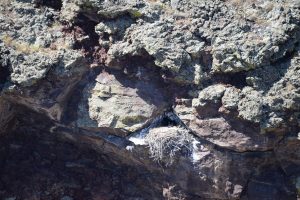 “On behalf of the Babbitt family and the entire Babbitt Ranches community, we are so thrilled to report this wildlife success!”

Following unprecedented measures taken by Babbitt Ranches to protect a golden eagle nest, the Arizona Game and Fish Department reports double success. A pair of eagles that had not been highly successful in producing babies in the last 10 years, delivered twins in late spring.

“This is very exciting,” said Kenneth “Tuk” Jacobson, raptor management coordinator for the AZGFD. “Seeing that they produced two eaglets, after the Babbitt Ranches Landsward Foundation had just implemented a handful of measures to try to help them out, is very gratifying.”

The young eagles were discovered by an AZGFD helicopter crew conducting surveys. “Billy Cordasco and the Landsward Foundation had been concerned previously about the number of hikers in the eagle territory. If this recreation impact kept going, we were all concerned we would lose the nest.”

Jacobson says the twins have been seen flying, which occurs around nine to 10 weeks after they hatch. “As fledglings, they stay in the breeding area – about a two mile radius – to learn how to survive and hunt from their parents, usually up until October.”

From January through May, Babbitt Ranches had protected that two-mile radius, known as the SP Crater Golden Eagle Conservation Complex (SPEC). During that time, it was off limits to all recreationists, including hunters, hikers and UTV users. The special rules were created through a unique conservation stewardship agreement between the Landsward Foundation and AZGFD, which strictly banned target shooting, hunting, trapping and any other method of taking small game animals, and the use of lead bullets.

“On behalf of the Babbitt family and the entire Babbitt Ranches community, we are so thrilled to report this wildlife success!” said President and General Manager Billy Cordasco.

The conservation framework that was put together to test on the SP Crater Golden Eagle Conservation Complex was designed to improve productivity, but there was no documentation, no direct observable proof available to show that this approach would work,” said Jacobson

AZGFD research findings reveal that golden eagle pairs will abandon their eggs if they feel threatened. “Productivity rates are definitely low in Arizona. We are still crunching the numbers from last season, but there weren’t a lot of active, successful breeding areas this year because of factors such as the prolonged drought, rabbit hemorrhagic disease and limited prey resources,” said Jacobson.

In all of the breeding areas across Arizona that have been tracked by AZGFD, only about a quarter of them produced two eaglets. “Nine percent produced three young, which is exceedingly rare,” he said.

Babbitt Ranches has been monitoring golden eagles across the 750,000-acre ranch for more than a decade. The golden eagle pair in the SP Crater area has been together for at least that long. During that time, the only other year it produced an eaglet was in 2018.

The SP Crater Golden Eagle Conservation Complex rules will remain in place from January through May for at least the next two years, as researchers continue to monitor and study the raptors and their nesting success. FBN