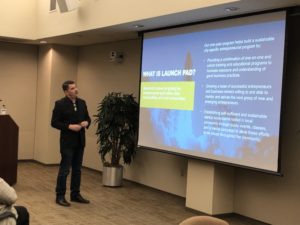 “Building a larger technology sector in Flagstaff is ideal for our mountain town since it requires very little environmental impact on those things that we cherish as a city – dark skies, less traffic, less pollution – and at the same time, offering the higher paying jobs,” said Scott Hathcock, president and CEO of Moonshot at the Northern Arizona Center for Entrepreneurship and Technology (NACET).

ECoNA Interim President/CEO Gail Jackson traced this trend to mid-2000, when “community leaders addressed a need for a business incubator. It was so successful that companies needed more space to expand to and continue scaling. The business accelerator was created and opened for business in 2015.”

“Flagstaff is working with many companies to bring new jobs,” said Todd Davis, founder of Hatch Innovation and NACET board chair. “NACET has created an ecosystem of rural startup organizations across Arizona. Most of these startups need technology solutions for their products, and we connect them with Flagstaff tech individuals and organizations. NACET is also attracting startups from cities outside of Arizona, and they move their businesses to Flagstaff, creating more jobs.”

Flagstaff employers posted 1,390 new jobs in the state’s technology industry for 2019-2020, according to the Arizona Technology Council (AZTC), which also reports statewide technology employment for the fourth quarter of 2019, having grown 2.1 times faster than the U.S. economy.

The average wage for a technology professional is nearly double the average wage in non-tech sectors, the AZTC states, with half of the state’s annual wages paid to employees in computer systems design, semiconductor manufacturing, and aerospace product and parts manufacturing. Arizona’s average tech salary is $85,874, an uptick of 6.76 percent from the prior year. Additionally, 252 jobs in other sectors are created for every 100 tech workers hired.

Flagstaff has forged its own mission as a beacon for rural Arizona communities supporting technology growth. The city’s leading employment statistics include recognition as “14 percent more specialized in biomedical manufacturing than the rest of the country” and “home to the highest educated workforce in Arizona,” according to ECoNA’s Jackson.

Moonshot at NACET “solicits pitches from those ambitious, disruptive innovators whose plans hold commercial possibilities,” according to moonshotaz.com. “If accepted, these entrepreneurs and their ideas are put through an educational track geared at developing a minimum viable product or an investment-ready business by the program’s end.”

Jackson said that the region has experienced an increase in California digital workers who are drawn to Flagstaff by affordable housing, reduced commutes and quality of life.

Dan Kasprizyk, CEO/founder of POBA Medical, a leading medical balloon developer and manufacturer, represents the kind of innovative spirit that Moonshot at NACET seeks, experts in their fields who need assistance with scaling a company or bringing an invention or product idea to market.

Kasprizyk appears in a NACET website video, where he speaks about his business expansion from California. “Moonshot helped us create a business idea in under two years, prove the business model, grow strategically and now scale to meet the overwhelming global demand for our products and services.”

NACET’s Hathcock identified Deckers Outdoor as “Flagstaff’s largest technology/digital company and our anchor in the technology sector for Flagstaff. In order to have true sector growth, it helps to expedite growth in technology with a company that has roughly 70 to 80 developers already in our city. But, with that being said, most of the companies we’ve been assisting all have some level of technology running through them.”

For that reason, Hathcock explained, Moonshot at NACET partnered with Amazon Web Services (AWS) in 2018 to make Flagstaff the nation’s first “CloudStart” city.

NACET recognizes opportunities in the software tech space, Davis continued. “We have been working on kick-starting the effort to understand the population of technology web designers, programmers, development operation and architects. Many tech associates work from home doing gig work.”

Next up, according to Jackson, is broadband communications expansion within the region. The Arizona Commerce Authority has awarded Coconino County a $50,000 Rural Broadband Development Grant and Gov. Doug Ducey has supported the Smart Highway Corridors initiative to install more than 500 miles of broadband conduit and fiber optic cable along designated sections of Interstate 17 from Phoenix to Flagstaff.

Meanwhile, Hathcock noted, NACET is “offering the ability to pitch to our mentors and coaches for free feedback, advice and the possibilities for connections and clients to help founders both launch and pivot during these trying times. We have opened this free service up to not only Flagstaff but the rest of the state and country with the idea that once the pandemic [guidelines have] been lifted, those tech founders may consider visiting Flagstaff in person and consider us a viable option and valuable partner in launching their companies.” FBN