You are here: Home / FBN Spotlight / Engineer Impacting Lives Behind the Scenes 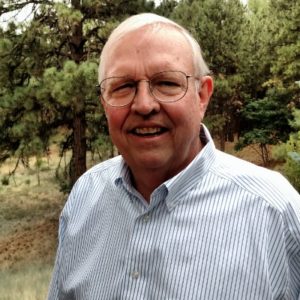 With most of the work being done in an office on a computer, the life of a civil engineer is usually uneventful.

But there were a few days in July 2010 when six engineering firms, including Turner Engineering, had a very short time to figure out a way to keep expected destructive flood waters away from the Fernwood, Timberline and Hutchinson Acres. The developments were in harm’s way in the aftermath of the huge Schultz fire.

Everyone was in an all-hands-on-deck mode and adrenaline was the cocktail of the day. “We had just hours to make a difference as fast as we could,” said Paul Turner, owner of Turner Engineering. “We didn’t do just one thing. You do what you can with all you’ve got.”

Their efforts showed where to open up channels and streambeds, which diverted floodwaters away from homes.

“We had to get this thing under control. It could have been so much worse,” he said.

“When it came, it came fast and deep with mud and ash flow. It was unbelievable.”

One person said it sounded like a locomotive approaching.

During the crisis, all the firms worked together quite well, but when the emergency was over, they went back to being competitors again.

Paul Turner, began Turner Engineering Inc., on Oct. 16, 1986. He is about to celebrate his 30th anniversary in business.

“Back in the summer of 1986, the job I had was a vice president of engineering for a land developer,” he said. “The economy went bad and they laid me off. I decided that it was time, as my father would say, to hang out a shingle and start my own business.”

He told his wife, Georgieann, “Gigi,” that he was going to start an engineering company.

He enjoys the work because every project is different.

“Each has unique characteristics, unique solutions and uniqueness about them such as a major water line installation, waste water line, site plans for all kinds of commercial and industrial businesses, roadways, anything we do is never the same,” he said.

“We are not a big company by any means and we never have been, but it seems to work out well. The thing that is important to me is not to hire left and right. I’d rather not take a job than lay somebody off.”

He said his employees are more like partners, and they have stayed busy.

“Paul Turner has been involved in Arizona Snowbowl for over 30 years,” said J.R. Murray, general manager of Snowbowl. “He was involved with almost every new project at the ski area since I arrived in 1985.”

Murray says whether the project is a parking lot, new lift, lodge modifications or ski trails, Turner’s firm is involved in the early planning stages, developing the site plan, grading plans and other aspects before construction begins.

“The most intense project was the snowmaking pump houses in 2012. We built four new structures in six months from planning to operating them,” Murray said.

He enjoys working with Turner and his staff because they understand the unique business, he says.

“Most importantly, when I tell regulatory agencies that Paul Turner is my civil engineer, they nod and say, ‘That’s great. We can count on his work and quality.”’

Born and raised in New York, he joined the United States Air Force, which brought him to Texas where he did basic and technical training. Afterward, he was sent to Luke Air Force Base in Phoenix.

Still, after he finished his work in the Air Force, he stayed on and worked for Lockheed. When that job ended, he decided he needed a change.

He married Gigi in 1985 and enrolled in community college where he studied drafting, but the technical portion, which touched on engineering, caught his attention.

“I said, ‘Okay, I can see my career path being solidified.’”

He moved to Flagstaff to attend Northern Arizona University.

Through the years, his business continued to grow.

“We do a lot of on-call contracts for Coconino County, and with the City of Flagstaff,” he said. “We do a lot of work for both agencies. And, we are a Certified Veteran Owned Small Business.”

In his spare time, he likes to go camping and fishing with Gigi. In the future, he would like to see the United States first before traveling abroad.

1) Who influenced you and why?

“I supposed the biggest influence were my folks. My dad never went to college. He said he went to the college of hard knocks, but he had the wherewithal to manage. He retired at 55 because he saved his money wisely and invested it wisely. Both mom and dad were definitely good role models.”

2) What is the best business advice you ever received?

“Probably from my peers, my fellow business folks. I have no formal business college training, but when I was starting my business, I had peers who were in business and we would talk and strategize.”

3) If you could do it all again, what would you change?

“I might have started college a little earlier. I guess I was soul searching for what I really wanted to do. I learned in college that I really didn’t know anything because it opened up so many opportunities. The business is successful, but maybe I would seek to make it a bit bigger. It’s no super money maker by any means. I didn’t expect it to be.

Engineers don’t make a lot of money. It is job by job and project by project.”

“The Cottage Place on Cottage Ave. It is really kind of an experience. They have escargot on the menu and they have some really finely prepared dishes of all sorts, from seafood to steak.”

“When I get home I just like to get really comfortable. I won’t go any farther than that. We like going fishing and camping. I get away from it and get the heck out of dodge, even if we don’t go far.”