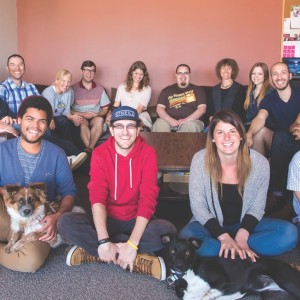 Just three years ago, entrepreneur Aaron Dragushan launched his newest business, Giftcard Zen – a website to buy and sell gift cards at a discounted rate – in the office of his Flagstaff home.

Last March, Dragushan announced that his company was quickly growing and looking to nearly double in size. Now, Giftcard Zen is selling one gift card every 10 seconds, and has expanded to 20 people, with a new office in downtown Phoenix in addition to its Flagstaff headquarters.

Giftcard Zen buys gift cards from people, and then sells them at a discounted rate. For example, a person could sell a $100 Target gift card to the company and make $80-$90 back. Then, Giftcard Zen will sell that card online for an amount less than the value, which creates a discount for the buyer.

“The company is now at 20 people,” Dragushan said. “As we’ve grown, we’ve also gotten really technically efficient, so we haven’t needed as many people. We’re looking for about 10 people for our Phoenix office right now, and then probably 20 people over the course of a year.”

To build his team, Dragushan has a few methods to his hiring process.

“We look for people that match our values, that are team players and people that are looking to grow personally and professionally,” Dragushan said.

He also requires every applicant to start his or her cover letter with the word “banana.” This, he says, helps him find applicants who are paying attention to the application process and are truly looking to be a part of the Giftcard Zen team.

“In a company that is growing quickly, there are a lot of opportunities to grow, so we want people who are willing to grow with us,” Dragushan said.

Dragushan chose to expand to Phoenix so the company could take advantage of the large number of talented professionals in the city. And the company is making its transition to Phoenix in style: Giftcard Zen has moved into the Seventh floor of the Luhrs Tower – Phoenix’s first skyscraper. Built in 1929, the building is set in the heart of the bustling downtown area.

Dragushan believes the expansion will help Giftcard Zen increase sales at an even more rapid pace. “I think to some degree we’re just keeping up with the growth that we have, and now we should be able to grow a little more quickly. It’s a business that has two sides to it – buying and selling – so, they are always in sync. We exist at the scale that people are selling us gift cards.” FBN

For more information about the company, visit https://giftcardzen.com.