By Stephanie Balzer on October 17, 2010 in Business, Local News 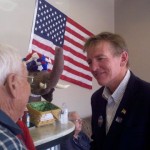 Running for public office is more than a full-time job, so how do candidates manage that, plus their businesses, plus their families and personal lives? It’s not easy, and often they are forced to make difficult business decisions as a result.

Paul Gosar, a dentist and Republican candidate to represent Arizonans in District 1, is challenging incumbent Ann Kirkpatrick, an attorney, in the Nov. 2 election.

Despite the fact that they sit on different sides of the political spectrum, Gosar and Kirkpatrick have a lot in common. Both are Flagstaff residents, hold advanced degrees, developed careers that provide a service to the public, and have chosen to run for public office, while in the process, sacrificing elements of their lives as professionals.

Kirkpatrick, a Democrat who was first elected to the United States House of Representatives in 2008, has mostly practiced law in the public sector. According to her bio on her website, she has worked as deputy county attorney in Coconino County and city attorney for the city of Scottsdale.

Kirkpatrick did not return calls for this story.

But Gosar – her Republican challenger who is running for office for the first time – has been forced to make big business decisions in the process of vying for the seat, including the decision several weeks ago to sell his dentistry practice.

On a recent Saturday afternoon, Gosar was returning phone calls from the road between campaign engagements, to talk about how campaigning has changed his business.

“It’s just a different chapter in my life,” said the candidate, who insists that he isn’t retired.

Approached to run in early in 2009, Gosar felt embraced by the Republican leadership and community, and as a result, made the decision to run. But that meant evaluating how he could operate his 25-year-old dentistry practice differently to accommodate campaign demands.

Always active in professional dentistry associations, he and his staff were accustomed to commitments on top of patient care, but political work took things to a new level. Gosar, who describes his staff as a “team,” says they strategized how to manage their time more efficiently.

Gosar adjusted his work schedule to begin seeing patients as early as 6:00 a.m., leaving to campaign as early as 10:00 a.m. on some days. Many patients were receptive to Gosar’s new schedule. Those who were not were given recommendations for their dental care, he says, adding, “that’s when it would have been nice to have an associate.”

Created after the 2000 Census, District 1is the tenth largest geographic district in the nation and includes much of Arizona outside of metropolitan Phoenix and Tucson. Because of its sheer size, campaigning means a lot of time on the road.

Like Bill Murray in “Groundhog Day,” Gosar would get up each morning and repeat the relentless schedule. The pace finally took its toll. One night at 2:30 a.m., on his way home, Gosar drove up to a stoplight and had a moment of clarity: he had no idea how he had arrived at that place in time and felt he was putting himself “in great danger.” He had “reached the human limit,” he says, and made the decision to sell his business.

Friends in the profession, he says, served as his primary consultants in making the decision.

Gosar’s former dentistry practice, located on E. Cedar Ave., now schedules appointments with dentist Scott Seaman, whose office declined to be interviewed regarding the purchase of the business.

Conversations about how to manage the stress and important business decisions always happen “on the front end,” Dale said.

As any savvy businessperson would, Gosar has a contingency plan in case he loses – though he also insists, of course, that he will win.

“I still have my dental license,” he said. “You don’t lose being a dentist.” FBN

View all posts by Stephanie Balzer →