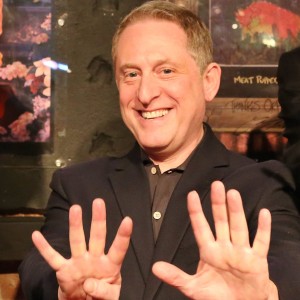 Planetary scientist Alan Stern gives the “Pluto Salute,” holding up nine fingers to show his support for Pluto as a planet, rather than its controversial demotion to dwarf planet status. Photo by Kevin Schindler

Canyons, cliffs, mountains of ice and large crater-free regions have astronomers in awe as the New Horizons space mission brings Pluto, its moon Charon and the vast Kuiper Belt into focus. The latest images and information from the historic journey will be shared in the town where Pluto was discovered 85 years ago during the 2015 Flagstaff Festival of Science: Exploring New Horizons, Sept. 18-27.

“The great thing about the Kuiper Belt, where Pluto orbits, is it’s a region that’s kind of frozen in time in the early days of the solar system. It’s like an archaeological dig into the history of the solar system,” said Stern. “So, let’s go back in time to that era when the planets were forming and that’s what this mission is all about.”

Early data reveal a startling range of mountains up to 11,000 feet in height on Pluto. The presence of these mountains, which scientists suggest may be composed of water ice, have them scratching their heads and will likely lead to new theories on the development and behavior of the Pluto system and icy worlds in general.

“I don’t think any of us in our wildest dreams imagined the diversity of terrains we’ve seen,” said Lowell Observatory astronomer Will Grundy, Ph.D., who leads the mission’s surface composition team. “We’re just seeing the tip of the iceberg in terms of incoming data, but we can already tell that Pluto and Charon are very complex worlds,”
Grundy, as well as Stern, will share the most up-to-the-minute findings during the Festival. In addition, W. L. Gore & Associates will explain the role of GORE-TEX® cables onboard the spacecraft.

The Festival offers more than 90 free activities. Highlights include the three-night Flagstaff Star Party at Buffalo Park, where astronomers will guide attendees through the constellations and Northern Arizona’s famous dark skies. Professional and amateur astronomers also will celebrate International Observe the Moon Night on Saturday, Sept. 19. Lowell Observatory will celebrate the “Year of Pluto” with demonstrations and stargazing during its open house, 5 – 10 p.m., Sunday, Sept. 20.

The Festival also will offer guided hikes through the Lava River Cave, into Hart Prairie Preserve across the Cinder Field where astronauts trained to walk and drive on the moon, and along ruins of ancient civilizations. Popular Festival events include Science in the Park, Flagstaff Medical Center’s Fantastic Voyage, Northern Arizona University’s Science and Engineering Day and The Arboretum at Flagstaff Fall Open House. For the complete schedule, visit www.scifest.org.

For a complete listing of the Festival program, visit www.scifest.org or follow the Festival on Facebook at https://www.facebook.com/flagstaff.scifest. Some activities require reservations.
Photos available:

Photo
Planetary scientist Alan Stern gives the “Pluto Salute,” holding up nine fingers to show his support for Pluto as a planet, rather than its controversial demotion to dwarf planet status.
Photo by Kevin Schindler