You are here: Home / FBN Spotlight / Following a Passion for Fine Art 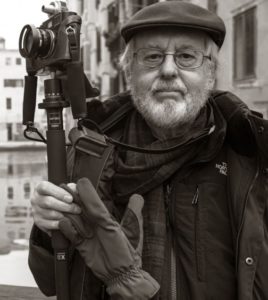 There’s an old saying, don’t give up your day job,” said Dick Arentz, who did not leave his first career until his passion for photography had developed into a full-time business. “I had three little mouths to feed.” The Flagstaff octogenarian is a world-renowned fine art photographer and author.

His book, “Platinum & Palladium Printing,” is considered by experts in the field to be the definitive text on the subject. The monochromatic (black and white) photo processing technique uses platinum or palladium instead of the usual silver gelatin. Platinum printing yields an expanded variety of mid-tone grays as well as warm blacks or reddish browns. The process was utilized by photographers such as Edward Curtis and Alfred Stieglitz, husband of Georgia O’Keeffe, at the turn of the century and is still en vogue with fine art photographers today.

Arentz was recruited to Flagstaff as an oral surgeon in 1973 and opened an office in the Malpais Annex of the old Flagstaff hospital. Later, he was one of the investor-builders of the Flagstaff Doctor’s Village on Beaver Street between Sullivan and Hunt Streets and moved there in 1975. All the while he juggled his “day job” with his large-format photography enterprise, which earned him recognition by the Arizona Arts and Humanities Commission as one of “Twenty Arizona Artists” for an exhibition, which opened at the Phoenix Art Museum in 1978.

After practicing oral surgery in Flagstaff for 10 years, he brought in a partner so he could spend more time with his art. This enabled him to focus on more projects, including Four Corners Country featured in a book published in 1986. The next year, a limited-edition portfolio of 12×20 platinum and palladium prints entitled The American Southwest was published with an essay by photography scholar and museum director James Enyeart.

“As my photography got going, I cut back on time [in surgery] until finally, in 1988, I went to half-time.” That year, he started photographing the human effect of the landscape in Mid-southern states and Appalachia. An exhibition and catalog entitled Outside the Mainstream was the result of that a three-year project, which was funded by the National Endowment for the Arts.

In the meantime, Arentz continued pursuing his passion by promoting his work to national galleries and museums and teaching photography classes at Northern Arizona University (NAU). Arentz taught in health sciences and in the art school as an adjunct professor at NAU from 1974 to 1986. The photographer revealed that his dental and science background helped him in doing research for his textbook. “Palladium and platinum are sister elements – they have the same chemical characteristics,” Arentz explained. “Platinum and palladium are noble metals that react to other metals with difficulty.

“Until 1985, I had my work rejected by quite a few galleries. But in 1985, I hit the jackpot. I dropped off a portfolio of prints at the American Art Gallery in Washington, D.C. They called me and they bought some prints, showed them and then contacted another gallery in D.C. From there, I went to New York.” Since then, his work was shown at more than 50 one-man exhibits in private galleries and museums in the United States and Europe. Smithsonian American Art Museum; Museum of Modern Art, New York; Museum of Modern Art, San Francisco; the George Eastman House; and the Minneapolis Institute of Art have Arentz’s work in their collections.

Who inspired you to choose your line of work?

“Ansel Adams influenced me to be more serious about my work. That was in 1969,” remembered Arentz, who took three or four workshops from the American landscape photographer and visited Adams in his home in Carmel, California. “He was a humble, terrific teacher,” added Arentz. “He would answer every phone call and piece of mail. I try to do the same thing. Of course, that’s easy now with the Internet.”

“The UK – for the combination of atmosphere with its soft, northern lighting, the language, the terrific people and bitter beer. I’ve done most my [UK] work in Scotland.”

What is your favorite time of day and why?

“That’s changed as I’ve gotten older. I used to be a morning person, but now, I sleep about nine hours per night.”

What do you do in your spare time?

“I listen to opera and classical music, and read books on history.” FBN