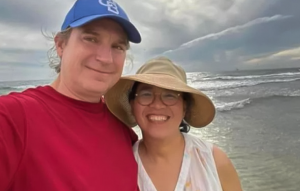 Flagstaff, the NAU community and foresters across the country are mourning the death of Forestry Professor Yeon-Su Kim. She and her husband, Corey Allen, were reported lost at sea on Thanksgiving while kayaking from Rocky Point. News reports state that Kim’s body was found Sunday, Nov. 27, by a local fishing boat about eight miles off shore. Search efforts continue for Allen, co-founder of the Flagstaff camera store, Hidden Light.

“Yeon-Su was an invaluable faculty member in the School of Forestry and esteemed academic leader who joined NAU in September 1998 and has served as the school’s executive director since July 2021,” stated NAU President José Luis Cruz Rivera in a letter to the campus community. “The first time I interacted with Yeon-Su, I walked away impressed by her love of NAU, passion for our mission, and devotion to advancing the well-being of our university’s community.”

NAU College of the Environment, Forestry and Natural Sciences Interim Dean Jim Allen says he has been receiving messages from forestry leaders from all over the country. “Many of the comments were about their memories of her as a person – her smile, warmth and positive attitude. There were also comments about her passionate advocacy for diversity, equity and inclusion within the forestry profession. Among other things, she was the chair of the Diversity Committee for the National Association of University Forest Resource Programs (NAUFRP). It was apparent to me that Yeon-Su was fast emerging as a leader on the national forestry scene, as well as a leader of the School of Forestry. It really is a tragedy to lose a leader with the passion, vision and drive, combined with such a pleasant persona, that Yeon-Su clearly had.”

On Thanksgiving at around 1 pm, Corey, Yeon-Su, and their daughter, Lux, went sea kayaking from a beach near Rocky Point, Mexico. Very strong winds came up. Corey took his daughter to safety on-shore and went back out to help Yeon-Su. The strong winds and currents made their return to shore impossible, and neither they nor their kayaks have been found as of Sunday morning [Nov. 27].

“This first impression would hold true in every subsequent interaction I had with her,” continued Luis Cruz Rivera in his letter about Kim, “and it is an impression that will now forever be cemented in my heart as I reflect on the many people from inside and outside our university community who have contributed in one way or another to the efforts to search for her and her husband, and who today are striving to help their children in these most devastating circumstances.”

FBN Editor Bonnie Stevens interviewed Yeon-Su Kim on several occasions. “Yeon-Su was involved in community forestry work in Thailand. I found her to be brilliant, so kind and caring, and refreshingly bubbly. She was a bright light.”