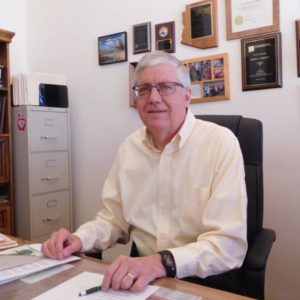 In conjunction with his board of directors, Maurer has managed an approximate $500,000 annual budget for the past several years. He says he is proud to be affiliated with the C of C and all it has accomplished during the past dozen yeas, despite some occasional fiscal twists and turns that kept the local business economy from expanding as rapidly as he had hoped.

“Despite the downturn that hit everyone a few years ago, our chamber has remained reasonably stable. We have about 850 chamber members. I am confident that pattern will continue, for the organization has good leadership,” said Maurer, 65. “From a personal point of view, what kept me moving forward was that each day, we had new opportunities to help someone. One day, it could be responding to a national media request for information about Prescott. The next day, it might be talking to members about issues they are facing. And the day after that, it might be talking to someone about a new development or project planned for the city.”

Maurer is credited with initiating some influential programs within the business community. The Prescott Area Young Professionals program was created eight years ago to involve men and women in the 21 to 40 age group. “That original small group has now grown to more than 100 people from throughout the Quad Cities area.”

Another successful venture was innovating the quarterly Women in Business luncheon, which offers speakers and programs.

“Dave has been a positive influence for the entire business community in Prescott,” said Kendall Jaspers, executive director of the Prescott Downtown Partnership.

More Than 38 Years of Experience in Arizona

Maurer, a native New Yorker, moved to Arizona after he and his wife, Nancy, earned their degrees at Hartwick College in Oneonta, New York. His first jobs were with radio stations in the Phoenix area, but he soon found a job with the Phoenix Chamber of Commerce, where he worked 10 years until 1978. He then worked as director of development for the Heard Museum until 1989, when he accepted a position as CEO of the Flagstaff Chamber of Commerce.

In 2004, he moved to Prescott to be the CEO of the Prescott Chamber. He and Nancy immediately became involved in civic and community organizations.

“We intend to remain active in the community. Our house is here, and our children and grandchildren are nearby. This is home,” he emphasized.

Maurer said a regional or national search would be announced for the CEO vacancy. Those interested in finding out more about the opening for the position can contact: