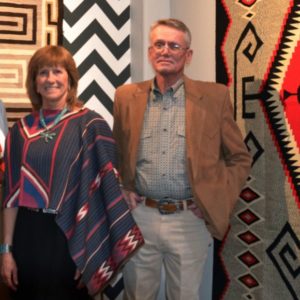 Tucked in a basin between three mountain ranges – the Huachuca, Santa Rita and Whetstone mountains – a flowered garden, flagstone pathway and decorative fountain announce the welcoming entrance to a very special hacienda-style ranch house on a verdant hillside in Sonoita.

Located at a 5,000-foot elevation in Southern Arizona’s Santa Cruz County, this is a home like few others; in addition to being a residence, it also provides a cozy, museum-like setting for a world-renowned gallery – the Nizhoni Ranch Gallery.

Gallery owners and residents Steve and Gail Getzwiller have worked side by side for 45 years in the pursuit of an undying passion: to preserve Native American culture, most specifically, the weaving traditions of the Navajo people.

In Diné, the Navajo language, nizhóní means “it is beautiful, pretty or pleasing,” a fitting name for the gallery, which is a “beautiful place,” Steve explained. “If you saw the gallery, you’d know why. It’s entirely furnished with period arts and craft furniture, set up so that people could get a sense of how they could display the art in their own settings.”

A native of Benson, 45 miles southeast of Tucson, Steve has earned a reputation as one of the premier collectors and dealers of Navajo weavings in the country.

“I’ve always been attracted to the material, and the material led me to the people,” he said. “A family friend was the director of the Amerind Foundation [a museum in Dragoon, Arizona], and I had the run of the place as a kid, and that introduced me to Native American culture.”

The collection also houses some important art from the Yavapai culture and the Verde Valley.

“I have some major Yavapai baskets in my collection,” Steve said.

There are even three fine willow-and-reed baskets from the late 1800s created by famed basket maker Apache Mary, who had been given as a domestic worker to a family by Major General George Crook, who fought in the Civil War and the Indian Wars.

The location of the gallery works well. Sonoita is about 45 minutes southeast of culture-rich Tucson.

“Steve and I have worked together to build the business,” Gail said.

All gallery visits are by appointment, and the website (navajorug.com) is the best way to contact the Nizhoni Ranch Gallery.

“We have clients from all over the world – Germany, New Zealand, England, Canada, Mexico,” Gail said. “Tucson has a great number of collectors, and people often fly into Tucson to see us as well.”

The couple met in 1972 in Benson, where Steve’s family has operated a 3,500-acre Angus cattle ranch for decades.

“I’m a seventh-generation rancher,” he said. His origins are Swiss on his father’s side, with the first wave of family migration around 1820, when a distant relative from the Gutsweller line left war-torn Switzerland and settled in Texas.

Other relatives immigrated in the 1860s.

Today, the heart of the gallery maintains its strong ties to the master weavers of the Navajo Nation.

“I would travel across the reservation when I started buying Navajo rugs. It used to take me a week and a half to cover all the trading posts.”

In the ‘80s, Steve became interested in improving the quality of Navajo weavings by distributing better wools and dyes to his best weavers, especially in the Wide Ruins and surrounding areas on the reservation.

Historically, the best weaving wool for Navajo rugs and blankets is the Churro sheep wool, a breed from Spanish explorers that is low in lanolin content, has translucent qualities and is a useful, long-staple wool.

Steve was able to locate the Navajo Churro Registry, where the genetics had been perfected for a better fleece. He also found artists who were willing to dye wool by hand, using natural sources such as roots, berries, flowers, leaves, moss, bark and seeds.

Steve also procured aniline dyes from Switzerland, as well as natural indigo from Mexico and Cochineal from South America and Mexico, a brilliant red dye derived from insects.

Thus, the Navajo Churro Collection was born, a landmark in the gallery’s history of preserving the weaving art in the Navajo culture. The Nizhoni Ranch Gallery offers exclusively these highest quality weavings to the world – touted as some of the finest Navajo weaving ever produced.

Traditionally, weaving is done by Navajo women, who in their creation myth were taught by a spiritual being called Spider Woman how best to construct the first loom, using sky, earth and sun rays.

From his early days of crossing the reservation in a mobile truck that served as his office, Steve established enduring relationships with the mothers and grandmothers of some of the women now working with him today.

“The most notable master weavers we work with are Kathy Marianito, Helene Nez, Elsie Bia, Cecelia Nez, Selena Yazzie, though all of the weavers we work with in the Navajo Churro Collection are master weavers,” Gail explained. “We have visited them for many years and have watched them work. Elsie Bia has come to our gallery to demonstrate for several of our openings.”

Steve said that Master Weaver Kathy Marianito is a direct descendent of Chief Manuelito and his weaver wife, Juanita. He was one of the war chiefs of the Diné people.

“Kathy is an amazing weaver, 85 years old,” he said. “She has sisters-in-law, too, who weave and are descendants of Manuelito’s son.”

Although Steve still makes scouting and collection tours out to the reservation, he no longer makes the bi-monthly trips he used to make. He also attends and sometimes judges at the annual Gallup Inter-Tribal All Indian Ceremonial, as well as the Santa Fe Indian Market.

Nowadays, the gallery takes a more technological approach to staying connected with weavers.

“The ladies are always texting me pictures of their progress, and I send out money orders on a daily basis,” Steve said.

The gallery also receives regular deliveries of weavings via the U.S. mail.

“Obviously, there’s a lot of trust involved,” he added.

Some weavings take up to three years to complete, but on average, weavers complete their work in four to six months.

The gallery was not always located in Sonoita. Prior to 2000, the collection was displayed, stored and sold out of a vault and showroom at the family ranch in Benson, Getzwiller’s Spear G Ranch.

“I built it myself,” Steve said of the solid concrete and rebar vault. “I always said, ‘If the place burned down, at least I wouldn’t be out of business!’”

Relocation to Sonoita provided a new direction for maintaining and improving the collection.

“The objective in establishing the gallery was to focus more on retailing, and that way I could pay the weavers more and offer the best value to collectors,” Steve said.

Looking toward their legacy, the Getzwillers are hoping that

young Navajo weavers will take up these difficult and beautiful art forms of their culture and preserve traditions for future generations. FBN