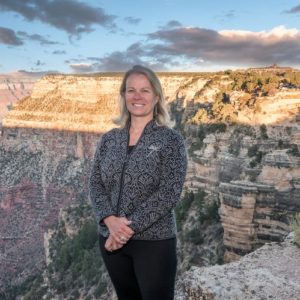 Hiking rim to rim of the Grand Canyon is impressive; hiking rim to rim and back again is even better and only one minor feat that Mia Bell has undertaken in her life. After working for Xanterra for more than 35 years, there is no doubt she has climbed another challenging trail that has led to her new position as the general manager of the Grand Canyon National Park Lodges.

Explaining that her career has come full circle, Bell’s first position with Xanterra began at the North Rim as a seasonal employee. “I worked for Food and Beverage as a dining room busser and moved on to cocktail waitress on the North Rim Veranda. It was the best job ever,” she said.

During her tenure with Xanterra, Bell moved on to other positions in various disciplines (and properties). At Everglades National Park, she worked in food and beverage then segued to controller, sales and marketing manager and general manager at Ohio State Parks. Bell’s next venture was at Yellowstone National Park, where she accepted a position as director of lodging and finally wrapped up her career there as assistant general manager. “It was an exciting time at Yellowstone and a proud accomplishment to be part of several facility improvements, which included a major multi-million dollar restoration of Lake Yellowstone Hotel to full glory on her 125th birthday.”

“We are pleased and honored to promote Mia to the position of general manager of the South Rim of the Grand Canyon,” said Xanterra Vice President of Parks Gordon Taylor. “Her tenure, commitment and experience with our guests, the National Park Service and ‘back of the house’ is exceptional and admired.”

Bell was born in Salt Lake City, Utah, and enjoys cooking  and traveling but says she does not hold on to any favorite recipes or destinations because, “there are too many new things to try.” She has a son, Nathan, who lives in Bozeman, Montana, and a six-month old black Labrador retriever named Bessie.

What character traits do you most value in business associates?

“I appreciate working with people who are innovative, have a healthy capacity for risk-taking, challenge status quo as a rule and have a sense of urgency to cause change. I suppose I get a little restless with routine, certain that there is always a higher bar to reach or a better way to reach it. Working with a competitive, independent thinking groups that can revel in celebrating their successes and are quick to shake off the efforts that don’t pan out so well and then regroup and try again, are a pleasure to work with.”

“I’ve never had a regular place I return to. There are so many places on my list yet to see, so I’m not ready for repeats. A bicycle trip in Italy is in my sites for this coming year. Pedaling over roads less traveled seems like a perfect way to take in everything a new place has to experience.”

What book would you recommend to the next generation of business leaders?

“A couple years ago, “Topgrading” by Brad and Geoff Smart was recommended to me. I’ll think back to that book on different occasions identifying various benefits of applying the Topgrading concept. I don’t think it will become dated over time. It’s essentially about the importance of maintaining top talent in your work teams. The past several years, it’s been so easy to focus on recruiting and filling staffing vacancies in a tough recruiting market and it’s easy to not apply the same effort and determination to take the right actions with the employees we already have in place when the two go hand in hand. Talented teams attract and retain new recruits and new additions who are inspired by team-building succession plans.”

“I recently hiked down to Phantom Ranch where one of the working staff was celebrating a birthday. When she came out to call all the guests in for dinner, we broke out in the birthday song for her. Out of the public arena, there’s me and Bessie, my dog. I think she likes my singing, and there are no critics.”

“There’s the occasional decadent Netflix marathon that can consume a weekend. I think I watched the last season of Longmire in two nights. I watched Longmire while living in Yellowstone National Park in Wyoming, where the story takes place. Longmire’s beer of choice is Rainier, as in Mt. Rainier in Rainer National Park, which is home to a historic district by the name of Longmire. Those are the kinds of crazy details you pick up on in a two-day marathon!” FBN