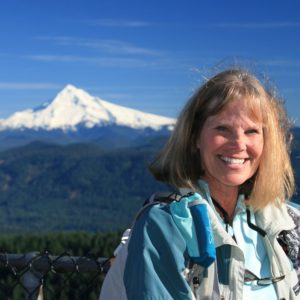 Denise Traver lives in St. David near Tombstone. Her husband, Brad, is the superintendent of the Petrified Forest National Park. They moved to St. David in 2010 when they felt that the Verde Valley was becoming “too busy.”

They enjoy the solitude of the area. She has been an avid backpacker for ages.

“I am a desert lover and there is something about looking out over the desert that opens me up,” she said.

She has not strayed far from her passion for the past 30-plus years. In fact, she made it her profession. A long-time backpacker and park ranger in the Grand Canyon, several years ago, she was included in the book, “Grand Canyon Women,” by Betty Leavengood, who specializes in instructional hiking books for areas all around Arizona. Traver was recognized in the book for her program that teaches women to backpack.

When the Grand Canyon Field Institute encouraged her to put the program together, she was thrilled.

While she taught backpacking skills to everyone, she was especially interested in teaching the skill to women. She had noticed out on the trail men trying to teach backpacking to their wives and girlfriends.

“Their priorities are different,” Traver said. “Women are strong hikers, but they have to go at their own pace. Women like to see things and learn things. It isn’t about how fast they got there like men.”

Traver started seriously backpacking at age 26. She had been widowed at age 24.

“I had no intention of remarrying,” she said. “I became a ranger at 30 years old. I was at Mather Campground on the South Rim working as a fee collector in 1989.”

She also worked as a backcountry office volunteer at a nearby station and had always wanted to be a backcountry ranger. Soon, the opportunity came knocking.

“Patty Thompson, the lead ranger, told me that the position of ranger at Cottonwood was going to be available and if I could get my law enforcement certification and EMT training, I could have the job,” Traver said.

She went to Santa Rosa College and got what she needed.

“I loved Cottonwood,” she said. And there she stayed from 1990 to 1992, although she continued to work out of the station for a total of five years. It is special to her because she met her husband, Brad, there. He was working as the park engineer and was managing various projects in the area.

The ranger station in Cottonwood had running water and propane, but that is about all. What it really needed was solar power, she thought. She approached Brad with the suggestion. They immediately felt a connection. During their courtship on Thursday nights, Brad would hike 14 miles to see her so they could spend the weekend together.

“He was in the best shape he had been in his entire life,” she said.

They were married about a year after they met.

The ranger station eventually received solar power, but it was after she left.

All during their marriage, one or the other had a job away from home, which kept them apart.

She had taken a position of naturalist at Phantom Ranch, where she gave programs in the afternoon and evening. By the time she finished at 9 p.m., it was too late to hike out the hour and a half to home, so she lived in the bottom of the canyon at the ranger station during her working days, nine on and five off.

With their schedules, it was difficult to be together.

“We didn’t get to see each other very often,” she said. “It’s been this way throughout our entire marriage.

She grew tired of being married and mostly alone, so when she was offered a position by the Grand Canyon Association, she jumped at the chance. She relished being in the teaching mode where she gave classes in backpacking to visitors.

The attendance at her backpacking classes for women soared.

When Brad was named superintendent at the Petrified Forest, the couple could be together at last, but rules being rules, she is not allowed to work there because of their relationship.

“I can only volunteer,” which she is happy to do, she said.

“I help people with hiking, equipment and food, etc.,” she said.

With Brad three years away from retirement, Denise says she has to wonder what it will be like to be together all the time. “I may have to go on more long backpacking trips,” she said with a laugh.

What’s the best advice you ever received?

“Don’t wait until you’re old to do anything. Do the fun stuff.”

“Most of them are any place along Highway 12 in Utah.”

“Two weeks ago, visiting an old friend from Cottonwood days.”

What is your favorite book?

“I always come back to ‘Desert Notes’ by Barry Lopez. It’s bare and it gets down to the bones of my soul. It is like being a raven flying over the canyon.”

“Backpacking. I just got back from a five-day backpack.”