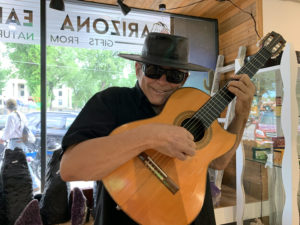 For artists like Esteban, the show must go on, despite the cancelation of live concerts because of the novel coronavirus.

Esteban, whose real name is Stephen Paul, opened up two downtown Prescott businesses in May 2019 – Arizona Earth and Relaxing Foot Spa – and is having to adjust the way he makes a living as both a musician and as a local business owner. He is known for everything from selling guitar packages on QVC to being featured in a 2006 Geico commercial.

The Billboard-charting artist has had shows cancelled all along the West Coast so far this year. His scheduled July 21 downtown Prescott performance – part of the Prescott Downtown Partnership Summer Concert Series – was also postponed.

The Prescott resident said he and his daughter, violinist Teresa Joy, will ensure their band takes proper steps the next time they have a live gig.

“We are ready to go do something because this isn’t going to go away for a while,” he said. “I have mandatorily said we’ve got to do social distancing. It’s hard because everybody wants to hear music and we want to play. But I don’t want to spread this virus to somebody that’s old, you know? Or someone who can get sick, bro.”

The well-known guitarist has played everywhere – from small venues like the Elks Theatre for a few hundred fans, to a crowd of more than 40,000 people at Phoenix’s Chase Field, where he played the National Anthem at the first game of the Arizona Diamondbacks in 1998. He also has been featured on regular PBS specials, where he has taught guitar and is known as a teacher of his craft.

QUIETLY EXPRESSIVE
Still, Esteban, 72, has not lost his passion for live performances, despite having most of his 2020 scheduled performances canceled in March. “The bottom line on that, brother, is when you play for a camera and then you play for an audience – it’s a whole other world. I’m used to playing gigs where you start to play and people feel the love and it comes back and it starts circulating like blood through your veins. You know, it comes through. I’m smiling right now. It’s the most beautiful thing when you can inspire people and let them feel something.”

The music aficionado got his first guitar at age 10 from his uncle, George, in the late 1950s. He said the Spanish guitar inspired him and changed his life.

He went on to train with Andres Segovia, once a virtuoso Spanish classical guitarist, who helped sculpt his “quiet, more beautiful” instrument rather than the electric guitar. The techniques of Segovia, a world-renowned musician and teacher, rubbed off on him. Segovia had many accolades throughout his career, including receiving a Grammy Lifetime Achievement Award in 1986 alongside Benny Goodman and the Rolling Stones.

Segovia is famous for playing with long fingernails to help amplify sound, something Esteban duplicated.

“Segovia always had nails. He was the guy that kind of started that back in, like, 1910. This is when he started this whole thing of teaching and playing Spanish guitar so that people could actually hear it. Otherwise, the only way you could hear it is to have 10 to 15 people near you.”

Esteban continues to be a teacher and a student of his craft. He has played cover songs from Elvis Presley’s “Love Me Tender” to “House of the Rising Sun,” an American folk song popularized by the Animals.

PLAYING BUSINESS
DIFFERENTLY
As a business owner, he has to learn the ever-changing landscape of the pandemic. Esteban said he paid his five employees at Arizona Earth and Relaxing Foot Spa during the business closure from March until the end of May.

For more about Esteban, visit
estebanmusic.com.

Preparing for a Different Kind of School Year
Beyond the Exterior 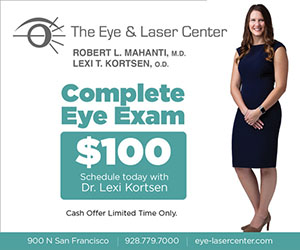