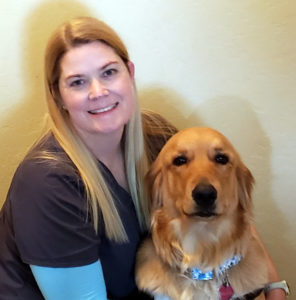 Trainers, owners express frustration with those who pass off pets as service animals.

For the first time in her life, Nannette Oatley Johnson has a service dog. Winchester, or Winnie, is a 75-pound, 2-year-old “goldador” – half golden retriever, half Labrador – that has been in training since she was a puppy. Winnie opens doors for Johnson, pulls her through grocery stores and can even pick things up that Johnson may have dropped, like her cell phone, although it may be covered with saliva and scratched up a bit when Johnson gets it back.

The author and motivational speaker calls herself “a sit-down person in a stand-up world.” An athlete all her life and top gymnast as a teenager, Johnson’s life changed dramatically when at age 22 a snow-tubing accident left her a quadriplegic. She ultimately gained back the use of her hands and arms, gave birth to three children post injury, and returned to athletic competition winning the 2001 U.S. Open Wheelchair Singles and Doubles Championship titles.

Now, at age 61, Johnson can feel the strain of an active life in her joints and she’s happy to have a little help from her service dog. “The greatest thing is when I’m going to the soccer fields to watch my grandson and granddaughter. Winnie helps pull me across cement, dirt and grass. She has a handle on her harness. I grab the handle, and away we go!”

Together with Debbie Lipely, Prescott’s Pawsitively Awesome Dog Trainer, Johnson is teaching Winnie how to assist her with more tasks.

“I’m a dog lover and I’ve always had dogs as companions. But I just had no idea how smart dogs were and what services they can perform for people,” said Johnson. “It’s brought me so much joy knowing she is there for me, to serve and not just love me. It’s like I went on a journey with her in the last couple of years and that alone has been life-changing to work with her. And it is work!”

Lipely says true service animals are life-changing to the people they help, but there is great confusion around what constitutes a service animal versus a therapy or emotional support animal, and what rights they have. “There is no such thing as a certified service dog,” she said. “So, it seems everyone makes their own rules. ADA (Americans with Disabilities Act) doesn’t recognize anything and there’s a lot of chaos surrounding the issue.”

Moran Henn, owner of Above and Beyond Dog Training and Pet Care for more than 20 years who received her dog training as a corporal in the Israeli Air Force, agrees. “There’s no real way to regulate it. You don’t have any certifying entities that determine whether your dog is or is not a service dog, so the problem is anybody can say it is. Some people do go through very professional trainers or organizations that train service dogs. But, technically, you can train your own service dog. This creates a lot of issues for handlers of service dogs, trainers, businesses, government offices, etc.”

Henn says individuals who blur the lines between actual working service animals and pets with owners who want to bring them along on their outings are causing a disservice to people with disabilities. “The issue now is they are not believed.”

Julie Mumford, a Prescott veterinarian technician, finds this behavior frustrating. “A lot of these dogs are not socialized correctly. They put other people in danger. And it’s not fair to those who have put the time and money into training their animals. It’s a lot of work, especially for seeing-eye dogs, it’s really super intense training.”

Mumford suffers from a condition called “syncopal disorder,” which causes her to black out. Her fainting episodes began to increase a couple of years ago and she has suffered concussions because of it. So, now, she lives with a golden retriever named Willow, a service dog who alerts her before she’s about to lose consciousness.

“I don’t know when it’s going to happen. There’s no warning. I can hit my head and injure myself, but Willow can detect it ahead of time. She alerts me to it and I’m able to sit down.”

The 43-year-old Mumford says Willow is a vital part of her life and her co-workers feel more comfortable when Willow is around as well. “She’ll mouth my hand to alert me. If I ignore her, she’ll get more persistent. She’ll jump on me or whine if I’m ignoring her. She’ll get to the point of barking at me.”

Lipely, Henn Johnson and Mumford all emphasize the word “work” when they talk about service animals. And that is an important distinction for businesses and pet owners to understand when it comes to service animals.

“The term ‘service dog’ is a dog that is specifically trained to conduct a task – that assists a person with a disability. So the key is an animal that is ‘trained to perform a task,’” said Henn. “The task can be everything from a very elaborate seeing eye dog that does a thousand tasks, like stopping before crossing the street and waiting for a closed door to open, to a service dog that’s just trained to put its paw on your thigh to create pressure, lick you, create a barrier between you and somebody else, turn on lights, pull a wheelchair or pick up something off the floor.”

Henn notes that service animals don’t have to just be dogs, noting that monkeys have the ability to handle tasks like helping an owner brush their teeth. Service animals are allowed to go wherever the person they are helping goes, and training one can cost up to $20,000. She says service dogs are not emotional support animals, which are animals that put people at ease or make them feel better. They are not therapy dogs either, which might be found with volunteers in nursing homes, libraries and hospitals. “They are not performing any tasks, they are just friendly and only need basic training,” said Henn.

As Lipely stresses, service animals must be invisible. “They‘re supposed to be there for the person, not supposed to even acknowledge another dog. If they are distracted from their handler, they are not actually doing their job.”

And that’s when Henn says businesses can send an animal and its owner on their way. “Businesses trying to do the right thing don’t have to allow dogs or other animals in that are not well behaved. And people attending any kind of business have the right not to be disturbed by a pet,” she said. “A dog wearing a service dog vest should not grab a sandwich from a kid standing in line. A dog should not be whining, barking, growling or jumping. If an animal is creating a nuisance, the behavior should be documented to protect the business owner.”

Forcing the issue recently have been airlines. In recent years, they’ve received far more complaints about animals allowed on flights than ever before – animals like squirrels, peacocks, small horses and iguanas. In December 2020, the U.S. Department of Transportation (DOT) announced revisions to its Air Carrier Access Act (ACAA). The final rule defines a service animal as a dog that is individually trained to do work or perform tasks for the benefit of a person with a disability. DOT no longer considers an emotional support animal to be a service animal.

In addition, the new DOT rule allows airlines to require people flying with a service animal to fill out a special form up to 48 hours in advance of travel. They’ll also be allowed to require that a service animal fit within its handler’s foot space on the plane.

Business owners confused about the rules have the legal right to ask what specific task the animal performs, but may not ask about the disability. Lipely advises her clients to carry a doctor’s note explaining the need for the service animal. She also makes herself available by phone if a client needs her to explain the situation.

As for the hard-working service animals, both Johnson and Mumford say their dogs know that when the vest comes off, they are no longer on the job.

“When her equipment is off, we call her ‘Wild Winnie,’” said Johnson. “I’ve seen her jump over an end table from the couch. She’s allowed to be all dog, all puppy, all fun and all wild.” FBN