You are here: Home / Business / Helping People on the Move 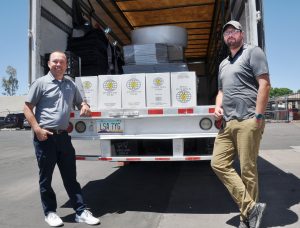 The lively real estate market and lifestyle/work environment changes resulting from the pandemic may leave some feeling like life is a deck of cards thrown into the air. For those people and anyone else needing support with relocating, Two Men and a Truck (TMT) is ready to help sort out the chaos by making moving easier.

With growth and expansion occurring in the professional moving industry, a franchise operation of the moving company opened in East Flagstaff this spring.

“We are expanding to meet our customers’ needs,” said Cheryl Ackley, a franchise development specialist with TMT International. “There is a need in Flagstaff to provide Two Men and a Truck services for home and business local moves, intrastate moves and interstate moves, along with packing and unpacking services. Currently, Flagstaff has a 100% referral rating from their customers in 2022. We feel this is very successful.”

TMT employees, Steve Bruner, a native of Mesa, and Andrew Potter, originally from Michigan, agreed in early 2021 to be co-owners of the new Flagstaff franchise, along with Chris Willems, who had been working with Bruner at two TMT locations in the Valley, Glendale South and Tempe, where Bruner has been working as general manager at both locations.

Bruner and Potter did not know each other until May of 2019 when they talked about the possibility of Potter coming out to Arizona to be an operations manager at the Phoenix stores. Potter was very receptive to the idea of relocating to work for TMT in Arizona and transferred to the state later in 2019.

“He was interested in a new opportunity with advancement, because the franchise where he was had no further growth opportunities,” said Bruner, who left a two-decade career in supply chain management when he realized he wanted to start his own business.

He was attracted to Two Men and a Truck because of the company’s values. “I get the opportunity to utilize all of my past experience and to learn how to manage my own business with a team of individuals.”

Like Bruner, Potter also left a career. “I was looking through Indeed for something to do to earn a little extra money and thought moving would be a good way to get a workout in and also earn money while doing so,” he said.

Ackley calls the two a great team. “We worked closely during the franchise process prior to opening.”

She says studies show that about one-third of all franchisees start out as employees. “Movers, drivers and customer service representatives are given every opportunity to expand in their careers with Two Men and A Truck.”

“I started as a mover and have worked through almost every position Two Men has to offer, up to my current position of co-owner and general manager,” said Potter. “I’ve been a mover, driver, trainer, team lead, move manager, in-home consultant, training and development manager and operations manager.”

“It has been awesome working with Andrew and he has grown into being a key leader for our franchise system,” Bruner said. “In 2022, after Andrew had grown further as a leader, we were able to jump on the opportunity to expand in Northern Arizona and bring on Andrew as a co-owner and general manager of this new location.”

“I love the town,” Potter said. “The first time I visited Flagstaff a few years ago, I knew I wanted to be here if we ever had the opportunity to start a location here. I’ve grown up and lived in small towns my entire life and while Flagstaff is much larger than any town I grew up in, it has a very small-town feel. It’s got a great sense of community, while still having conveniences of a larger town.”

Most of the staff has been hired for the Flagstaff franchise but there are a few more spots to fill, such as an inside sales representative and a non-CDL driver.

“The biggest challenges in opening Flagstaff was, first, finding an affordable space to lease and, secondly, securing the delivery of new moving trucks from the various vendors we source from,” said Bruner. “Everyone we talked to during pre-opening was very excited for us. There is a need for a professional moving company in Northern Arizona and they like to see companies opening and expanding in Northern Arizona.”

Like most companies, Two Men and a Truck is experiencing a labor shortage and rising costs. “Arizona is growing so rapidly it is causing more and more moving companies to open up in Arizona and the existing ones are expanding,” said Bruner. “So, we have to continue to be on our A game and utilize strong brand and training curriculum to stay ahead of the competition.”

Giving back to the community is part of the company’s goals. “We are looking forward to executing some of the charity events we do, such as Movers for Moms in the spring and Movers for Meals or Mutts or Military in the fall,” he said.

Two Men and a Truck started 35 years ago in Lansing, Michigan, when Mary Ellen Sheets used her two sons, high-school students Brig and Jon Sorber, to haul trash, brush and household goods in an old pickup truck. When the sons left for college, calls kept coming in to Sheets with requests for services, so she hired movers and kept the enterprise going. Today, TMT is the largest franchised moving company in North America, with more than 390 locations and 3,000 trucks operating in 46 states in the U.S., in addition to Canada, Ireland and the U.K.

Ackley attributes the company’s success to the strength of the franchising structure. “We’ve worked diligently to build a franchising model, which is both exciting and dependable for new franchisees,” she said. “Our process involves candidates seeking information about moving services and us answering the important questions regarding their potential investment. We feel this is an integral part of getting to know them and providing transparency in our business model.” FBN