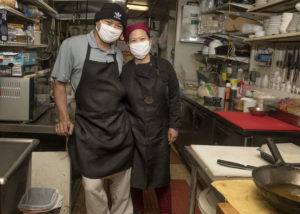 Foodies often find that eateries off the beaten path serve some of the tastiest surprises and most authentic ethnic dishes. My Pita Wrap Mediterranean Grill, The Asian Station and the White Dove Coffee Shop are just a few of Flagstaff’s hidden gems.

Tucked away in the Green Tree Mini Mall off Milton Road, My Pita Wrap Mediterranean Grill not only serves fresh Greek favorites such as hummus, falafel, baba ghanoush and chicken, beef and lamb gyros, it also has an in-house food market. Owner Sam Abdallah says all his recipes are derived from his hometown in Palestine, 15 minutes north of Jerusalem in a village he says is full of olive trees.

“I use my family’s recipes from the old country and 98% of our food is prepared from scratch,” he said.

According to Abdallah, his Corner Mediterranean Store is the only store in Northern Arizona that sells Greek food. “We stock spices, Middle Eastern teas, dates, tahini, halva, bulgur, stuffed vine leaves and a very rich olive oil made fresh from the factory in Greece.”

Abdallah says he uses the olive oil in his dishes.

“The food is healthy, made from scratch, and so delicious,” said Northern Arizona University (NAU) nursing student Camie Riese. “The staff is also very friendly. I’ve bought several items from their store and next on my list is their virgin olive oil.”

Tucked in among the colorful storefronts of South San Francisco St., The Asian Station would be easy to miss if you’re not looking closely. Serving a fusion of Chinese, Japanese, Vietnamese and Thai food, owners Kampy and Ladda Khonphian opened their restaurant two years ago.

“My favorite aspect about The Asian Station is the owners. They remember you from the first time you walk into the door so you get lots of personal attention,” said Liquiterra co-owner Sydney Francis. “The food is great and I like the fact that I can get a variety of my favorites such as Kraprow and their Chicken Noodle soup is an amazing, flavored with anise and drumsticks. I go there at least once a week.”

Going on 17 years in operation, Steve Dohse opened his White Dove Coffee shop as an addition to his church. He then closed his church and kept the coffee shop, expanding the space to include two stages surrounding his eating area and a space next door that he rents to the Flagstaff School of Music.

“Because we’ve been here so long, we’ve become a well-known gathering place for the east side. We were super busy up until COVID, which slowed us down, but we’re limping along,” he said. “For three years, we had a full-on concert menu and baby bands. Many high school students starting bands would come play, plus the Flagstaff School of Music does all of their shows on our stages.”

“A lot of people are surprised when they come in,” said White Dove Coffee Manager Joseph Albrecht. “When you peek in from the outside, it looks like a small box, then you come in and see this huge open area.”

“We have gluten-free banana bread and blueberry muffins, along with vegan burritos and vegetarian crepes,” said Albrecht.

White Dove Coffee is Located off 7th Street in the small strip mall across from Big Lots and Cal Ranch. “A lot of people have commented that we are the hidden gem of East Flagstaff,” said Dohse. “We offer amazing coffee products and menu selections and it’s a great place to hang out and even work.”

“I love it here at White Dove Coffee,” said local resident and former employee Sarena Rogers. “It’s my favorite coffee shop and the people here are great.  I really like the oatmilk lattes.” FBN