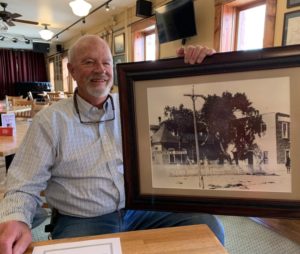 Henry Taylor, as a college student earning his psychology degree, grew up with a desire to help people, a love of history and a fondness for the West. While going to school, he read Zane Grey’s Call of the Canyon, a novel set in Northern Arizona’s cattle and sheep ranching heyday of the early 1900s.

Readers can just about taste the dust and feel the bumps as Grey describes horse-powered travel over rugged, rocky terrain. But Taylor could feel something more. He took note when the novel’s heroine, Carly Burch, warmed her hands by the fireplace in the Hotel Weatherford, where the book was written. Taylor, who grew up with his six brothers in the historic Arizona Rancho hotel some 87 miles down the road in Holbrook, felt an instant connection with the old building on North Leroux.

That image of Carly and the fireplace stayed with him as he visited the Weatherford in 1975. “I’ve always wanted to save this place,” he said from a seat in The Gopher Hole, a popular lunch spot and nightclub in the restructured basement. “I walked in the building and learned it was going to be torn down. The red sandstone blocks were the only thing valuable. I made a commitment that day to buy it and save it. I’m still trying to save it.”

Taylor set aside Grey’s book and chased after a more compelling story, one about Flagstaff’s early years, which he believed was hidden behind plaster walls of the deteriorating building. He went after it with a fierce determination, and a hammer. His actions uncovered several fireplaces, along with original red brick and a passion to restore the historic hotel to its early 1900s grandeur.

Some might say Taylor’s hammering pounded out a collective revitalization vision for the downtown and fresh chapter for Flagstaff’s historic district.

“I’ve always considered Henry a hero of the restoration movement,” said the late Flagstaff historian and former Coconino County Superior Court Judge Richard Mangum in May 2005. “The hotel played quite a significant role in Flagstaff’s history and Henry and Sam [a.k.a. Pamela Green, Henry’s wife] have done more than anyone else in Flagstaff for historic preservation.”

Ushering in the New Century

The Victorian-style hotel opened on New Year’s Day, Jan. 1, 1900, as the first of its kind in Flagstaff, offering class and sophistication, plus hot and cold water, electricity and steam heating to well-to-do easterners who came by railroad looking for an adventure in the legendary West.

It was built by John W. Weatherford, an ambitious Texas businessman who arrived in Flagstaff by horse and buggy in 1886. He was charmed by the town and saw great opportunity, particularly in tourism. He started a successful mercantile business and horse stables, built the Mountain States Telephone Building in 1909 (now known as the Exchange Pub) and opened the Majestic Theater Opera House in 1917 (now the Orpheum). He also poured the first concrete sidewalk in Flagstaff, served as a Justice of the Peace and built the first road up the San Francisco Peaks, which he envisioned as a lucrative toll road to amazing views.

“For years, the Hotel Weatherford was the finest hotel in town,” said Mangum. “It signaled the end of the pioneer era, ushering the 20th century into Flagstaff, built partly in response to the tourism industry opening up because of the Grand Canyon Stagecoach.”

The grand hotel was the center of activity in the isolated mountain town; however, changes came with the 1920s. John Weatherford lost the hotel to his wife in their divorce. He died alone and penniless after his toll road project went bankrupt. Some say his disgruntled spirit still roams the halls and appears in doorways. Other ghosts have been reported, including a bride and groom who commonly visited one of the rooms, which has since become a storage closet.

These stories and more have revealed themselves as Taylor and crews of relatives and friends have refurbished the building beam by beam.

Call of the Weatherford

When Taylor took ownership of the hotel in 1975, he did indeed save it from demolition. He initially turned the hotel into a residential facility housing clients for the Arizona Department of Vocational Rehabilitation for two years. In 1978, Charly’s was opened as a pastry shop and the hotel was leased to Northern Arizona University for a semester as a residential classroom housing 30 National Honors Society students and teaching faculty studying local geology. In 1978, Taylor succeeded in having the building listed on the National Register of Historic Places, the first in Flagstaff. In 1980, the hostel was turned into an American Youth Hostel and hosted young foreign travelers up until 1995.

Green came to the hotel to work in the restaurant in 1980. She and Taylor married in 1983. They created Charly’s Pub and Grill, created Monday Night Blues and brought in live bands to play as a way to generate revenue while they lived upstairs above the dance floor. With Sam’s interior design expertise, they adorned the hotel rooms with early 1900s décor and opened them to guests.

Through the years, they found that the hotel had been remodeled more than 13 times, with more walls erected and new rooms created. It had housed a number of businesses, including a radio station, a cobbler’s shop and a movie theater called The Gopher Hole. At one point, a new floor was added above the lobby, dividing the 18-foot original ceiling at the entrance.

With the weight of the additions, Henry learned the building was sagging in on itself and would not be able to support its structure for long. Thus, a massive renovation effort began in the 1990s with the support of historic preservation grants.

As a result, the three-bay façade was restored on the old telephone exchange, now the Exchange Pub, in 1995. The Zane Grey Ballroom opened in 1997, the first phase of reconstructing the decorative wrap-around balconies was completed in 1999, and the hotel’s crowning element – the cupola, or witch’s cap – was returned to the top of the building. The balconies, which Henry learned about after finding a photograph from the 1920s, were destroyed by fire in 1929.

The grand entryway and high ceiling has been restored as one of the most recent projects. And the entire building has been reinforced through a massive engineering and construction effort, which resulted in the return of The Gopher Hole.

Just as it was an important gathering place in the early 1900s, the Weatherford remains a downtown centerpiece. Charly’s Pub and Grill has been a longtime Flagstaff favorite for creative Southwestern cuisine; live music on all floors keeps the hotel bustling with nightlife; and special occasions are commemorated in the warm glow of the Zane Grey Ballroom. In addition, thousands now gather for the traditional Great Pinecone Drop on New Year’s Eve and local groups get together monthly.

“When you are headed to downtown Flagstaff to meet with local leaders, you want to be in a place that embodies the feel and history of the town. Hotel Weatherford is that place,” said Sharon Tewksbury-Bloom, organizational development consultant and owner of Do Good Be Good. “From gatherings with Flagstaff Women’s Leadership Network to company in the pub, to business holiday parties in the ballroom, to watching the 4th of July Parade from the balcony, I have so many great memories from the Weatherford.”

Retired Flagstaff realtor Bruce Crozier recalls how members of the 9 0’ Clock Coffee Club met for years in the historic building. “As many as 22 or 23 of us would come for coffee in the morning. About half of those were there for lunch at noon, and then a lot of the businessmen would come for afternoon coffee. It’s a place where everybody likes to go. Henry and Sam have sacrificed a lot to make it that way.”

Henry says his goal has been to make the three-story building whole and fully functional. He and Sam continue to improve the historic hotel with plans for an elevator and beer garden.

The couple is a constant presence in the hotel, along with their daughter, Chelsea, who is often greeting guests in the lobby. Like Henry, she was raised in a historic hotel – the one her dad read about – from her very first day.

“We feel as though we’re answering a calling of sorts to serve as this fabulous building’s curator,” said Henry. “The Weatherford Hotel is part of who we are, but it also belongs to Flagstaff.”

What was your favorite part of the renovation?

“Restoring The Gopher Hole is certainly significant because the original Gopher Hole was there in the beginning. It was an important meeting place then and is again. For years, we used the basement for storage and today we have this beautiful space to share.”

What was the biggest surprise during the restorations efforts?

“The biggest surprise was learning about the balconies. The only person I knew who remembered the original balconies was the late astronomer Henry Gicglas who was shooed off them by Mrs. Weatherford who told him they were for paying guests only. Since we’ve added them back to the building, so many people have enjoyed them.”

What is your hope for the Weatherford in the next five and the next 100 years?

I hope it’s still here! That’s been the primary goal — to save it for humanity. It’s been the focal point of the town and is an original piece of Flagstaff history.”

What holidays do you enjoy most at the hotel?

“The 4th of July is always great because that holiday with the parade was a big tradition for the hotel and the town in the early 1900s, and it continues to be today. New Year’s Eve is a favorite because we started the Great Pinecone Drop tradition. This year marks the event’s 20th year.”

What is your favorite Weatherford Hotel ghost story?

“There was a birthday party in the Zane Grey Ballroom about 15 years ago. In a picture commemorating the event, there was a person in the shot that nobody knew and they swear was not there.” FBN

Some information in this article was gathered from a report created by Nicole Dykert in February 2000.