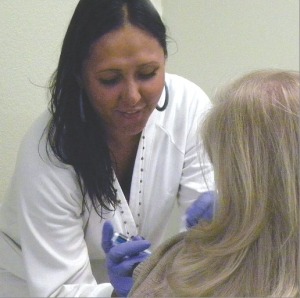 The Ebola outbreak in West Africa and deadly diseases elsewhere in the world may infect the imagination and spread fear among observers, but Flagstaff is more susceptible to an influenza epidemic from the often preventable circulation of airborne germs.

Mare Schumacher, epidemiologist at the Coconino County Public Health Services District (CCPHSD), says that while an occurrence of Ebola cannot be ruled out completely, chances are slim.

“When friends tell me they are worried about getting Ebola,” she said, “I advise them that the cigarette they are smoking or the fattening foods they are eating or texting while driving is much more likely to have adverse health effects, and I remind them to get up-to-date on their influenza vaccine. Influenza season is near and we will have illnesses from influenza.”

The United States Centers for Disease Control (CDC) estimates the cost of influenza (“the flu”) at $10.4 billion a year to the nation’s businesses and employers from loss of productivity, increased costs for health care and negative impacts on employee satisfaction. Occupational Health and Wellness Management, a New Hampshire company specializing in improved employee health, reckons that 15 million to 60 million Americans are infected with the flu each year, resulting in up to 70 million lost workdays.

Extrapolation using Coconino County’s proportion of the U.S. population suggests 6,000 to 37,000 residents affected, with more than 43,000 work days missed and $4.29 million in business and employer losses to influenza in a typical year. It is not only the physical symptoms of those who catch the bug that causes misery, but also the bottom-line impact on a firm’s prosperity and the local economy. The CDC advocates two ways companies can combat these negative influences: hosting immunization clinics in the workplace and promoting vaccinations in the community.

There is no way to predict the timing, severity or length of a flu season’s impact, according to the CDC. Most commonly, the country’s season peaks in January and February, beginning as early as October and running as long as May. In Flagstaff, it usually starts in November and runs through April, according to CCPHSD. The CDC expects 151 million to 159 million doses of this year’s flu vaccine to be available for the 2014 to 2015 season.

CCPHSD suggests that people help protect themselves and others from illnesses by avoiding close contact with sick people, refraining from touching eyes, nose and mouth with unwashed hands, cleaning hands often with soap and water, wiping/disinfecting frequently touched surfaces (especially if someone is sick), covering one’s mouth and hands with an upper sleeve or tissue when coughing or sneezing, not sharing eating utensils, cups and straws, and staying home when sick.

Those ounces of prevention – along with annual immunization programs – can outmaneuver the pound of cure, if the most vulnerable population groups – children and senior citizens – are spared from contracting influenza and its potential deadly complications on susceptible immune systems. While CCPHSD advises everyone to get a flu vaccine each flu season, it particularly urges specific individuals to “get vaccinated either because they are at high risk of having serious flu-related complications or because they live with or care for people at high risk for developing flu-related complications.”

That is why annual immunization programs are so prevalent and avidly touted by local and national health professionals for disease prevention. Consulting one’s medical provider is recommended to discover what vaccinations specifically should be administered to each family member. Everyone – especially seniors, who are at increased risk for complications – should get flu shots each year, based on their doctor’s evaluation, the CDC advises.

Other high-risk individuals include pregnant women, children younger than age five (especially under two years old), people of any age with certain chronic medical conditions, residents of nursing homes and other long-term care facilities, and those caring for or living with them. Flu complications can include bacterial pneumonia, ear infections, sinus infections, dehydration and worsening of chronic medical conditions, such as congestive heart failure, asthma or diabetes. The CDC acknowledges children younger than six months old as particularly vulnerable, since they are too young to be vaccinated.

In a world gone global, antibiotics, vaccinations and ensuring clean water are among the “small number of things that have changed the health of humans over the last couple of centuries,” said Dr. Paul Keim, director of pathogen genomics at Northern Arizona University’s Translational Genomics Research Institute (TGen). Keim and a team of scientists trace infectious diseases around the globe at the request of international health officials. Blending genomics, ecology, evolution and public health, they study what occurs on a global scale and suggest solutions.

“We’ve eliminated an enormous number of diseases – and what they cause – by vaccinating,” Keim said, but antibiotics and vaccinations “are dwarfed by the third thing we’ve done and that’s clean water. When we started getting clean water spread around the world… we dramatically reduced the disease burden of people.” FBN

For information about vaccinations in Coconino County, contact the flu information line at 928-679-7300.