You are here: Home / Tourism / Insuring Against No Rain 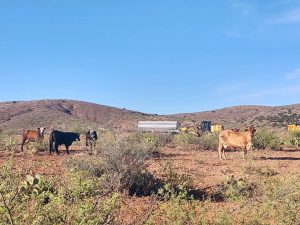 “I’m hopeful that the USDA will maintain this program, because it’s proving very beneficial.”

With the long-term drought hitting Arizona ranchers and growers hard, you might be surprised to learn that it is possible to take out insurance against getting no rain.

Arnie Schlittenhart has been involved in Arizona agriculture all of his life. In 2002, he was hired by AMS Insurance and managed a cotton gin at Stanfield, in Pinal County. When the cotton gin was sold in 2006, he initially went to work for the Farm Service Agency. But when his former employer, AMS, approached him to come back to them to administer a whole new type of program, he took the plunge.

Agribusiness risk management has been around for quite a while. But the program Schlittenhart now administers isn’t available for all agriculture – there is a multitude of other insurance products for row crops. Instead, the Pasture, Rangeland and Forest Insurance (PRF) program is specifically meant for rangeland and those growing alfalfa for hay. “Even if it’s a Forest Service allotment, it’s considered grazing land for the purposes of this program,” he said.

The program operates on a calendar. The year is divided into 11 intervals, each interval being a two-month period. Producers select the intervals in which they project they will need the rain. Administered and subsidized by the Risk Management Agency (RMA), the insurance division of the U.S. Department of Agriculture, the nationwide program divides up the land surface into squares. Premiums depend on the level of coverage. If a farmer takes out coverage for 70% to 75% of the year, the RMA covers 59% of the premium. For 80% to 85% coverage, 55% of the premium is covered by the RMA. At 90% coverage, 51% of the premium is subsidized. Ranchers are encouraged to use historical rainfall data to select the intervals likely to be most beneficial for their coverage.

Schlittenhart is keen to point out that this is not insurance against drought, but rather a lack of rain. This is determined by the data. “The program has been running for a couple of decades and when it started, it was based on using a ‘green-ness’ indicator of the forage on the rangeland,” said Schlittenhart. “But that didn’t work very well, so around 2005, the assessment was switched to a rainfall index, using rainfall data from the nationwide network of National Oceanic and Atmospheric Administration rain gauges.”

When the rainfall in a given interval falls below the coverage level on a grid square, an indemnity is generated, and that is applied to the premium due. Once the rancher has paid the bill for the premium, the additional indemnity is paid to them.

“I have several clients in Yavapai County. They are ranchers raising beef cattle, most of them with an annual cow-calf operation, where they sell off the calf and keep the cow. The clients would prefer decent rains to a payout, but when it doesn’t rain, they’re excited to get that check because it enables them to buy hay and haul water.”

This year in Arizona, because of the very dry spring, 100% of Schlittenhart’s ranchers received a rainfall insurance check.

Ben Shiew and his mother, Nancy, ranch on 140 sections of federal land from Perkinsville north to the White Horse Lake, across Coconino and Yavapai counties. They received money from the insurance program this spring. “This is the first year we’ve done it. I was standoffish about it in the beginning,” said Ben. “But Arnie explained it real well – and it’s all pluses. When Arnie crunched all the numbers and explained the coverage, that’s when I changed my mind. It’s a great deal. We’ve had a dry year so far, so the money is helping us to haul water.”

“The take up across the Southwest and especially in Arizona is very good, [which is] not surprising given the ongoing drought situation here,” said Schlittenhart. “I’m hopeful that the USDA will maintain this program, because it’s proving very beneficial.” FBN