You are here: Home / Local News / Journalists Team Up with CCC to Offer Mary Jo West Excellence in Communication Scholarship 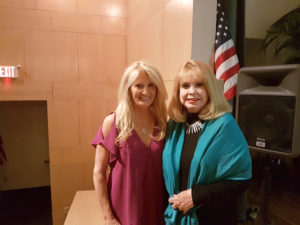 Stevens says she cannot emphasize enough the life-changing opportunity that will be afforded through the scholarship.

Career journalist Bonnie Stevens has announced a unique collaboration with her lifelong mentor and pioneering television news anchorwoman Mary Jo West to support young women and help shape the future of communication. The Mary Jo West Excellence in Communication Scholarship will be offered through Coconino Community College in Flagstaff and the CCC2NAU program. Perhaps the greatest value of this award, says Stevens, will be the guidance and coaching that comes with it. The scholarship will be granted in the fall 2022 semester. Preference will be given to a Native American female.

“Someone once said, ‘The meaning of life is to find your gift; the purpose of life is to give it away,’” said Mary Jo West. “How grateful I am that my former colleague and journalist, Bonnie Stevens, has honored me with this opportunity to help ‘give it away’ with this scholarship! Not only will this gift to a special student provide financial assistance, but we will have the opportunity to personally meet and mentor whoever is chosen. The Native American community has been underserved in the communication profession and hopefully the recipient of this scholarship can then pass on that knowledge to others.”

“To say I’m ecstatic about this opportunity to partner with Mary Jo West to help develop and sustain communication excellence into the future would be the understatement of the year, in my world,” said Stevens. “This scholarship is about promoting integrity, quality, responsibility and women in communication, which are deeply held core values for me as a professional journalist. Beyond that, the teenage girl in me is freaking out about working on a project with Mary Jo West! My life has come full circle. Mary Jo West was my role model in the mid 1970s, as was Mary Tyler Moore, or more accurately, her character as Mary Richards making her way through the tough and male-dominated news industry. But Mary Jo was real, and miraculously, was the first person I wrote for fresh out of NAU with my journalism degree. I’m still pinching myself over that opportunity!”

West’s television news career took her from reporting news, sports and weather in the dual market of Tallahassee, Florida/Thomasville, Georgia, to the national network anchor chair at CBS in New York. She came to Phoenix in 1975 as a producer-host at the Public Broadcasting Station KAET-TV in Tempe. A year later, she was invited to share the anchor desk with legendary Phoenix newsman Bill Close at the CBS affiliate KOOL-TV and became the first primetime anchorwoman in Phoenix.

“Mary Jo West was, and is, my idol to this day,” said Fox 10 anchorwoman Linda Williams in a 2018 interview following West’s induction into the Arizona Women’s Hall of Fame. “She was the heart and soul of KOOL News for several years and she opened the door for all women journalists to follow. I could go on and on about her strength and character as a journalist, but it is her strength and character as a woman that guides me still.”

“When she started in news, it was tough,” said retired Fox 10 weatherman Dave Munsey, who worked with West in the ‘70s and ‘80s. “She paved the way for all of these women in Phoenix anchor chairs. Every one of them owes her something.”

At Coconino Community College, with campuses in Flagstaff and Page, Native American students make up more than 20% of CCC’s enrollment. The college has been recognized for its efforts in promoting accessible and affordable education to Northern Arizona.

“Scholarships like the Mary Jo West Excellence in Communication Scholarship, which offers a young Native American woman an opportunity to develop a powerful voice for community change, are a vital part of the mission of Coconino Community College,” said President Colleen A. Smith, Ph.D. “The college is dedicated to empowering individuals to inspire our communities and help shape the future of our beautiful county.”

Stevens says she cannot emphasize enough the life-changing opportunity that will be afforded through the scholarship. “Mary Jo is the epitome of professionalism, grace under pressure, warmth and generosity. She is a first-rate storyteller and has encouraged so many young women in the news business. She continues to give to the world through her efforts to bring love and clean water to an African orphanage, and encouragement and hope to those suffering with mental illness. As my mother would have done for me, I would not be surprised if moms with aspiring journalists at home are ripping this article out of the newspaper or printing it out on their printers right now and placing it in their daughters’ rooms!”

See the extended interview with West on Zonie Living: Business, Adventure and
Leadership at https://starworldwidenetworks.com/shows/bonnie-stevens, sponsored by Flagstaff Business News.